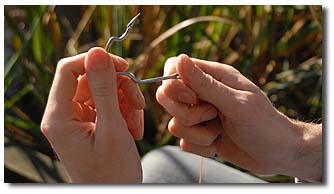 Saturday morning, the day after the pickup shoot, and I am looking out of my window in amazement at the weather. According to the BBC it should be bright sun, and it’s grey and miserable. Yesterday on the other hand, the day we shot, WAS AMAZING SUNSHINE! We could not have been luckier with the weather.
So the shoot went very well. We had a very small crew, running without sound, and now ticking over like a well oiled machine. We cranked through loads of simple cutaway shots, like the one here of the gnarled shark hook the killer pike chews up in the story.

By lunch time we had about ten shots in the can, all with amazing backlit sunshine. What was great is I 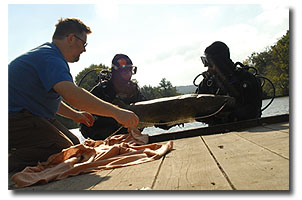 could feel the edit of the film coming together, as I knew just how these new shots would slot in perfectly and plug little problems.

After lunch came the moment of truth with our large, rubber ‘Bruce’ like pike, built by Jenny Cochrane. It was operated by a couple of very nice divers, Steve Reid and Dave O’Dell, who came along for the fun of it. I don’t quite know what they made of Goliath when they finally saw him, but they were game, so they got into the water and we all attempted to make movie magic! Sadly, for most of the time, Goliath performed just like a big rubber pike would. BUT… after lots of takes, we could all see that we

got short glimpses of real genius, where Goliath looked terrifying and enormous and completely real. I can’t wait to see the footage. So 100% success!

We also did a few shots of photos that we had to drop during the main shoot as the actual props were not ready (as we had only just filmed the cast in costume – this is always a scheduling nightmare as actors need to be in costume etc., and it’s rarely 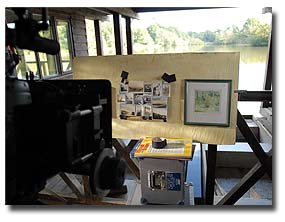 done before the main shoot). We did these shots in the main building at Bury Hill Fisheries, overlooking the lake, which is a bizarre place to do such shots.

We should get a tape of the rushes from the labs on Tuesday and have it all cut in by Tuesday night. I hope to have a locked picture by Thursday and a final test screening on Friday, making tweaks over the weekend if needed. Then it’s all about the final picture conform at 2k res, getting the digital effects right, and a track lay and Dolby Digital Mix. The very talented guys at Videosonics have already offered their help so I know the movie will sound a million dollars!

Nine ways to create a world class sound mix for your film
The ONE thing I needed to get right for Urban Ghost Story... BTS on the stunts
Rewrites, Reshoots, ADR and Pickups, top ten tips to get the most from your resources
After years working in the real world finding my life rushing past me faster and faster, i...
Sound Mixing your film: Top Fifteen Tips For Working With The Professionals
It's 5.51 am…
First stab at the DVD cover…