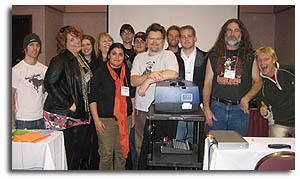 I just wrapped the two day Guerilla Flm Makers Master Class here at FTX in Vancouver. It was a tremendous success! I have been running this course for a few years now and it’s always a pleasure as I can see in the group, so many people become profoundly motivated to get on, not just with their films, but also their lives.

This was also the first course on which I also integrated some of the stuff I learned on Gone Fishing – and I showed the film as a test – it went down better than I could have possibly dreamed of! I could only show the final locked offline cut from the Avid, but it’s pretty well honed with basic grading, music and sound. The group loved it, with all of them fully understanding the narrative. Everyone was very moved by it. One person, Kathy Fedori, was so touched by the story, she took $100 out of her bag and gave it to me, right there on the spot! This was a splendid example of one of the things I teach on the course, about taking a stand for what you really want to do, and money will then somehow magnetically become attracted to you. I really hope Kathy will be able to make it to the premiere in London in January. I am sure she will!

There was a real mix of people on the course too, and all of them were very dedicated and sharp. It was a really good event and I miss it already. Anyhow, here are a few of their comments…

‘Incredibly inspiring on both a film making and personal level…’
Diane Fraser, Editor

‘The past two days have filled me with excitement and enthusiasm that I only felt prior to my three years at film school…’
Josh Rainhard, Director

‘I am blown away at how much incredible info Chris taught me in two days…’
Taroh Hall, Film Maker

‘You are one of the greatest motivational speakers! I am going to start work on my film tonight!’
George Somerwill, Film Maker

‘Your honest, vulnerable energy, combined with clarity and fun made this seminar a powerful tool for transformation in my perception of who I am as a film maker, and for that I send you my heartfelt thanks… Who you are in your books and films, opened the door to seeing who I could… This is new. This works. This is a rare gift. Thank you Chris!’
Kathy Fedori, Film Maker

Blimey… I will post all the responses on the course page soon.