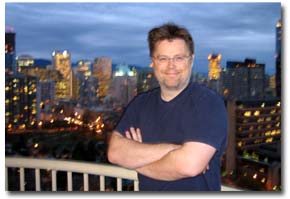 I flew into Vancouver, BC, Canada a few days ago, with a dual remit. First off, I am running my two day Guerilla Film Makers Masterclass here at a film makers conference called FTX West. Second, I am location scouting for Rocketboy and plan to spend a week looking for amazing places to shoot the movie – as well as getting the lowdown on the Canadian film industry.

First off, the course. I am running this one as a hybrid, building a large new section in from Gone Fishing, and what I learned making the film. This is in part a semi dressed rehearsal for the UK course I will be running in January. And I am really looking forward to it. I met with film maker and FTX Organiser, Rob Nielson, last night for dinner and we discussed the course and the state of the Vancouver film business. Vancouver is being hit hard by the writers strike with huge shows closing down completely in the next few weeks. Rob made the point that he understands why there is a strike, but often, those who are striking don’t really understand how far reaching and devastating it can be for other people involved in the film process and business.

FTX is also carrying some other seminars, including Genevieve and Andrews Guerilla Film Makers Documentary Masterclass which I hosted for them last year in Ealing, (where it was an amazing success). I am also looking forward to the FTX convention where all the cool new hardware will be on show. I will report back on anything particularly cool that I find.

Right… got to go and collect Genevieve and Andrew from the airport!

Failing to plan is planning to fail... Film making success lies in pre-production
A Masterclass In Microbudget Film Making - Interview with 'Paranormal Activity' writer and...
Super Hero Training Day For The LSF Team
How I decided to make one film, then chose to make another
Top six ways to save money on your film
Rocketboy act three turning point and the deep wounds inflicted
Making A Bigger Worm…
Signing Books at FTX Canada