By Chris Jones on November 22, 2007 in Film Production, Rocketboy 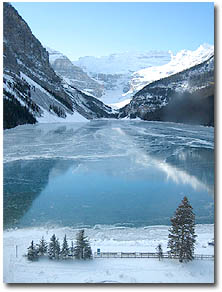 Having just completed the Masterclass in Vancouver, I decided to head up to the hills (Rocky Mountains actually, and nothing like a hill) and rest before starting work on my redraft of Rocketboy – with a view to possibly resetting the film in North America.

My redraft is the second part of the ‘Gone Fishing’ proposal for Samuelsons – I agreed to make a great short film AND redraft the Rocketboy script.

For rest and inspiration, I booked in for a night at the Fairmont Lake Louise Hotel. As luck would have it, the skiing world cup is taking place and all the cheap rooms were taken, including the one I booked, and so I got a free upgrade to the Gold Pass level – and boy am I living in the lap of luxury! The pic here is the view from my window. Blimey.

The new draft of Rocketboy will be based on several pages of really excellent script notes that I got from Samulesons over the summer, and also on my own ideas too. I have a whole new subplot based around the British Space race and the ill fated Black Arrow project that was abandoned in the sixties. The challenge is going to be – how do I add the 20 or so new ‘things’ into the story suggested by Samulesons, and also add the whole new Black Arrow subplot, while making the script 20 pages shorter! For me this is now all about turning something that is good into something that is world class and truly excellent.

I have a yellow post it note on my PC that reads – SAY MORE WITH LESS… This is now my motto for this draft.

ROCKETBOY may be fuelling for take off!
What REALLY makes a film maker successful? One simple strategy...
Pitching Rocketboy
Top 7 things I learned making my first feature 'I Am The Prize' by Oliver Purches
Reflecting On The Year… And why need to celebrate more
'Rocketboy' relaunches with a tonal shift that makes ALL the difference
FTX Guerilla Film Makers Course a Success
Worm Shot Completed by Russ Wharton