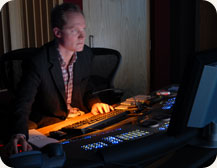 I have been frantically dashing around, making sure everything is ready for the final picture conform / picture grade tomorrow at Midnight Transfer. Thankfully I have been pretty organised through the whole process, so while it’s a long haul, so far there have been very few unforeseen hitches. Let’s hope it stays that way. (pictured here is our Ace picture grader, John Claude in action at MT).

The final picture conform is like the full stop at the end of a sentence. Once it’s done, the image is creatively completed. This final stage is where all the various elements are brought together and made to feel like a single element, as though the happened ‘in reality’. For instance, all the images will be colour tweaked to make sure they look the same (remember some shots were filmed weeks apart, with different weather and yet they should still look like they happened in the same moment).

In Gone Fishing, we have a number of elements to bring together…

1. The 35mm film negative. This is the actual film from the camera, a negative, that has been scanned on Midnight Transfers Northlight Film Scanner.

2. The special effects. Theses are image sequences that were edited and manipulated on Adobe After Effects by Russ Wharton, and saved as a DPX image stream.

3. Titles. I am hoping to get them all nailed down tonight and created as hi res tiff’s in Photoshop, with one ENORMOUS long tiff for the end roller.

4. HiDef HiSpeed Images – we shot some images on a high speed High Def camera, and those also need importing and lining up.

All of this is really rather simple on paper, but in the real world, it can be a headache as every film is like a prototype. The smallest error can send things cart wheeling in the wrong direction… and let’s not even get into data movement. At this resolution, single image frame sizes are around 12mb! I bought a half terabyte USB2 drive to back up all the data once it’s completed! Blimey.

Right, got to get on with those titles… I have an early start tomorrow…

The ONE thing I needed to get right for Urban Ghost Story... BTS on the stunts
Dragons, Reapers and Guerilla Filmmaking: Turning Writer to Director With My First Short ‘...
Summer Scars, DVCProHD Feature In Post...
How I made a SciFi Epic Film on a shoestring... Making KIDDO
Dick Smith, legendary makeup artist has died, his legacy for me, cannot be underaterd
Matte Painting Complete!
Grading – The First Day…