By Chris Jones on January 15, 2008 in Premiere, VideoBlog 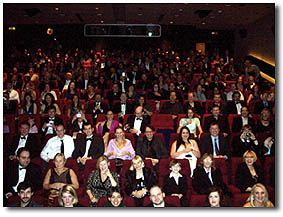 If you have problems playing the video, click here

After a long, hard, but immensely rewarding day running the seminar on ‘Gone Fishing’, the time had come to get changed into my DJ and prepare for the premiere.

We had been very worried about numbers as we had invited nearly 300 people to the event, all of whom had said they would come, and the theatre has only 228 seats! As it turned out, around 210 people arrived, so that worked out fine.

AND THE ATMOSPHERE WAS ELECTRIC!

I was personally delighted that so many people made a real effort to get dressed up for the event, and those 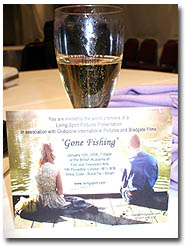 who didn’t, I know came from some filming work and did not have the chance to get changed. To make such an effort made the event extra special and memorable.

As 7.15 arrived, we ushered everyone into the theatre and my heart started pounding as I watched everyone take their seats. This is it! No more claims that ‘in the future my movie will be…’ In a matter of minutes, it will be ‘the movie was…’ and ‘Gone Fishing’ will be officially out in the world. It’s a nerve wracking moment for any director. As Eddie Hamilton says, ‘you have instinct, you have experience, but ultimately, you just don’t know how people will react…’

The lights dimmed and we showed the trailer from Kodak, one of our major and very generous sponsors. The lights came up and I climbed the steps to the stage and was hit by a deafening wall of cheers! I was quite unprepared for that level of encouragement and quite humbled. For a moment I paused, a tear in my eye, a frog in my throat, but I pulled it back together… I had a speech to deliver, even though right now, it was a piece of paper shaking in my hand!

I won’t go through my speech, you can click on the video link of the while event below if you want to hear it again, but I must mention two enormous gaffs!

Both happened because I wrote my speech at 11.30 the night before, and used the end roller to make sure I didn’t forget anyone. As it happens I did forget two very important people, who were not on the end roller as they were on the single title cards.

First was Russ Wharton, visual effects guru – I don’t really need to say much more as you have seen the movie and know just how amazing his work is. 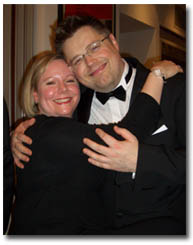 But I was particularly mortified to realise, as soon as I saw her after the screening, that I neglected to acknowledge my very good friend who I have known for years, Catherine Arton, our casting director. Catherine put in more work than any other single crew member on Gone Fishing, working tirelessly for months to find the right cast, working with sometimes very difficult agents, with no budget, in fact spending her own money! So Cathy, I am sorry, you know you are a superstar and that this film could not have been made without you!

The lights dimmed… The curtains opened… The movie played.

I am delighted to report that the audience reacted in the way we hoped. They laughed. They cried. They wanted more. 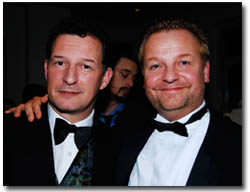 To see the movie projected was awesome. It simply looked jaw dropping. All Vernon’s hard work (and the camera team, the Labs and Midnight Transfer) really paid off. The sound I think is what most people were surprised by though, just how BIG it was, much like a huge action movie! Thats all down to Ro Heap’s on set sound, Eddie’s editing and Videosonics mixing, all of which was first rate.

Then came the moment I was truly unprepared for.

As the lights came up, I got a standing ovation! I don’t know how long it lasted, but it seemed to go on for ages. So much so I began to feel very self conscious. When you spend all your time shining the light on others great talents, when the spotlight hits you unsuspectingly, it kind of takes you by surprise. I was very humbled,

and hope that we can all share that the standing ovation – it was really an outpouring of emotion for us all. This movie belongs to everyone involved.

Form that moment, it’s all a bit of an adrenaline haze! I was floating on air.

The after screening party was great, with photos of the shoot up on the plasma screens, a glass in everyones hand and a smile, hug and kiss from everyone I met.

For me, that moment is why I strive to make movies that reach out and touch people. It’s the pinnacle of the craft and artform that I aspire toward. It’s what drives me.

Since the premiere, I have received so many emails from people saying how much they enjoyed the film and the event. I will post some of them in the next few days, along with a link to an online photo archive where you can get prints of the premiere made if you want them… 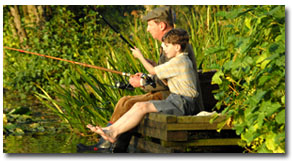 My final thoughts? For me, this premiere will be remembered forever. It goes down as one of the top ten moments of my life so far, and it’s quite near the top too.

On a personal note, some of you may know I lost my father a year or so before ‘Gone Fishing’. If there is a place we go to after we die, I suspect my Dad popped back down to BAFTA for the night, and I know he would have been very proud.