By Chris Jones on January 3, 2008 in Post Production, Sound 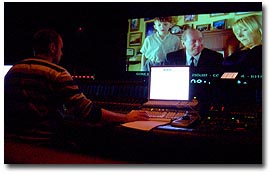 Today was the first day of the final mix for the soundtrack to ‘Gone Fishing’. It took place at Videosonics, where on and off for the last six weeks, sound designer Bernard O’Reilly has been crafting a wonderful soundscape for the story. Today was the start of mixing all of those elements, along with the music, and live dialogue that was recorded on set, into the final surround sound mix.

The day started well with the senior sound mixer, Andrew Stirk, bringing in all the sound elements that Bernard had put together. We are mixing in studio 2 at Videosonics, essentially a small cinema with a huge mixing desk at the back. First order of business was cleaning up the dialogue tracks, getting the levels right, filtering out unwanted frequencies – and a problem from the shoot came back to haunt us. During 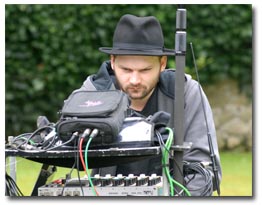 shooting, sound recordist Ro Heap had warned me that one of the HMI lights created a loud high frequency buzz. All the way through editing we have been unaware of this problem as the speakers we used to monitor the sound were good, but not good enough… they simply didn’t have enough ‘top end’ to reproduce the problem. But now we are in a cinema environment, it was painfully loud. So most of the day was spent removing this horrible whine. Mixer Andrew, applied lots of separate filters, sometimes up to seven on a single dialogue track, to remove these unwanted frequencies… but we got there… finally…

The day ended with us mixing the first few minutes of the movie, and I am giddy as a schoolboy as it sound sooooo AMAZING! The attention to detail Bernard has shown is incredible. Tiny rusty squeaks on car doors, individual duck squaks, multi layered atmospheres, sparkling and multi layered foley effects… it all makes such an enormous difference.

11 Steps Required to record your score with an orchestra in Macedonia – a Guerilla Masterc...
How To Record Your Own Foley Tracks At Home
Dolby Licence is secured for 35mm prints of Gone Fishing
Nine ways to create a world class sound mix for your film
Sound Mixing your film: Top Fifteen Tips For Working With The Professionals
Top Ten Things To Consider When Mixing The Sound For Your Film In A Professional Dubbing T...
The HD Rabbit Hole Goes Deeper…
The Final Mix Is Complete! And it sounds AMAZING!