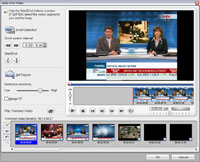 One of the reasons I went for HD DVD over BluRay was that I knew that it was much closer to DVD than BluRay is, on a purely technical and mastering level. After doing some poking around, I discovered something rather cool – it’s possible to master an HD DVD onto a normal DVD. This means, using my old DVD technology (basically a £20 burner on my PC) with cheap and cheerful DVD-R disks (at less than 10p a pop), I can now make HD DVD’s at home.

But… there are limits. Having a much smaller disk size means that I can store less on a DVD than on an HD DVD (which comes in 15gb and 30gb varieties). I haven’t tried DVD 9 disks yet, but it appears that DVD 5 disks will happily carry a short film. Reports on the web suggest anywhere between 20 mins and 50 mins. Of course that is dependent on data bandwidth and most of us are going to want high quality, so that means shorter video times.

Of course, this should all be easy! I wish!

It astonishes me at how muddy the water becomes when you start saying that dreaded phrase – HD – is that 720p 03 1080i? And what is the other axis, full HD or compressed pixels? PAL or NTSC? Hang on, wasn’t HD supposed to be a universal format? Grrrrr!

It seems to me that there are a squillion different HD formats, and all claim to be compatible! For now, I have been running tests by using a really excellent slideshow program called ProShow Gold, to render a short HD MPEG, (1920 x 1080) at 25P, and at also at 60i, then importing into ULead Video Studio, making a simple HD DVD, rendering out and burning a disk. The first few attempts have been haphazard – the very first was a 60i MPEG that played back but was jerky (I think it re-encoded to 25P), followed by a series of dead disks, and as I write, I am attempting a 25P 1080P conversion to 1080i 50i. Blimey, you’d think that all of this would have been streamlined by now. It really should not be this difficult.

Once I get a workflow that is solid, I will have to deal with the further problem of how on earth do I get HDCamSR onto my computer? I have a suspicion I will end up getting a facility to encode the file which I will then master and burn from home.

For those of us who want real techy details, here is a link to some HD DVD and BluyRay tech stuff (and  see now that HD DVD does not support 1080 25p, whcih is why my disks were bumming out!)

Stop Press – I finally got it to wrk in 1080 x 1920 60i, and at first glance it was underwhelming. Then I realised that it was a limitation of the source material (not the HD delivery), and when I got to the end of the slideshow, I had a few very high definition professional photos, and the quality was simply smashing. Really eye popping. Crisp, sharp, detailed, no compression artefacts, smooth (I worried that DVD would not be able to sustain the data bandwidth but it held up fine…) I will keep you abreast of further developments. But for now, it seems as long as I make the project 1920 x 1080 24p, then all should be awesome. 'Gone Fishing' at home on HD DVD burnt onto a 15p disk! Crikey.

Subtitles for Festivals
Nothing is constant, except change… The death of Prime Video stores
One day to go… Gone Fishing Premiere
DVD Cover printing - How to do it
Summer Scars, DVCProHD Feature In Post...
Prepping the premiere!
The Final Sound Mix Begins!