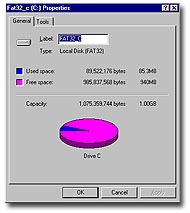 So I have now committed to BluRay (did they not realise that if you are not clear when you say BluRay it sounds like you say Blurry, not to mention Blurry is what my spell checker wants to change it to!) after several studios jumped camp and ditched HD DVD. The word from up top went along the lines of… ‘Consumers don’t know which format to chose, BluRay or HD DVD, fearing they will buy the one that loses the format war – so they wait, and both formats suffer… PS3 has sold a gazillion units, so let’s get behind BluRay…’ And so the format war appears to be drawing to a close. We will see.

So today, I went to Midnight Transfer who have rendered the whole movie out as a series of 10bit TIFF images. Nearly 20,000 11mb files in all.

That’s a lot of data.

The plan is to take this TIFF sequence into Avid, and render out an HD stream which I can then burn to BluRay so that I have Gone Fishing on a domestic HD format for showing when I don’t have an HDCamSR deck or 35mm projector to hand.

I took in a 500gb USB 2 drive that was formatted with FAT32, but all day it kept crashing out. Eventually, all the files were copied onto the disk, but strewn across a few directories. I offered to tidy this up so I could get away earlier, but no matter what I did, I just couldn’t get all the files in one single directory – remember that’s 20,000ish files at 11mb each! After some research I found out that FAT32 can handle 65,534 entries in one directory, but they need to be 8.3 names… so a name like

(note the underscores are used as Linux, which MT uses for their Baselight grading system, does not like spaces and uses _ instead)

Each file and subdirectory takes from two to thirteen entries, depending on the length of its name (the 8.3 format taking only 2), so with longer names, the available entries can reduce very fast, to the point where you just can’t fit 20,000 files in a single directory – which is why all day the system kept failing. Grrrr!

In short, we hit about 15,000 files before we maxed out and the copying crashed out.

Now the problem is I need to shift all of the data onto another drive, so I can reformat the other drive into NTFS which can handle 4,294,967,295 entries. Now that’s better! So why bother with old FAT32 format at all? I am sure there are other reasons but one is that it seems that Macs don’t like NTFS and can only read NTFS formatted drives and not write to them. Ho hum.

So finally I have got to the bottom of an entire days head-scratching. Now my PC will be on all night as it shifts 220gb of data, in 20,000 files, onto another drive. In the morning I will reformat the old drive into NTFS and shift the same 220gb of data back, then drop it all into a single folder, and then… hopefully, import it into Avid.

I thought I would be mastering a BluRay disk today. Now it looks like I won’t even get there until late tomorrow night.

And this is just a short film! The mind boggles at the notion of a feature film.

The moral? Remember you are pushing desktop technology past it's tolerance when working in true HD. There is just a huge amount of data and files to deal with. And pre-format your drives into NTFS if working on a PC.

Summer Scars, DVCProHD Feature In Post...
Top Ten Things To Consider When Mixing The Sound For Your Film In A Professional Dubbing T...
Archiving Gone Fishing
Reflections on the world of Gone Fishing