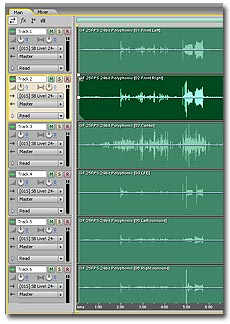 Yesterday I completed the PAL DVD for ‘Gone Fishing’.

This DVD is for showing to festival co-ordinators and people who may be interested in the new features I am writing. For now, it won’t be available to anyone else, not even my family! (as I explained on the blog before, we need to keep tight reigns on the DVD so it does not appear on YouTube and destroy our festival aspirations).

I have been working with Adobe Encore which I have found very good most of the time, but cryptic and flaky at other times.

I rendered the picture and sound separately – the picture part of the DVD was made from an HD uncompressed Avid project, so it took a few hours (the 10 min project was 150gb in total), but it looks stunning. On DVD, it will never look better.

After remixing the sound, I was able to do a new soundtrack for the DVD too. We shot at 24fps and DVD runs at 25fps, so I needed to do a speed up – which I did in Adobe Audition (by changing the length to 96% using the Stretch tool). Incidentally, I was also able to make a Polyphonic WAV in Audition too – that is, all six channels of sound in single WAV file, uncompressed – it’s pretty easy in Audition, which also has a surround sound mixer built in.

I have spoken to many sound engineers and everyone is saying basically what I already knew, which is ‘don’t bother with pitch correction when speeding up or slowing down, as it introduces new and unnecessary audio artefacts.’ There is such an enormous amount of misinformation floating around about 24fps and 25fps and as anyone who has done my Guerilla Film Makers Masterclass knows, I have plenty to say about it! Well now I have even more having just gone through the grinder of 24fps with no budget. Categorically stated now, if you live in PAL world and have little money, shooting 25fps is easier and cheaper and has no technical or presentational disadvantages at all. None.

So now I have a version of the sound at 25fps (converted in Audition), and I used an old Dolby Digital Software encoder to create an AC3 5.1 surround file (which is compressed heavily). Dolby Digital can handle up to 640k /second, but Encore would crash out with using anything above 448 k/ sec, which is annoying, but they way that it is. It still sounds very good though.

I also managed to encode a DTS track which is 1.5mb / sec, so three times as much data, and it sounds so much better. As we speak, the 24bit files are being encoded by Richard Osborne at Abbey Road Interactive into a DTS HD audio stream, which will deliver uncompressed 24 bit sound via BluRay – that is if Encore will play ball (the manual says it will but I am not so sure – and so the BluRay saga continues).

Also, in the next few days I will be encoding an NTSC disk for the USA.

I promise once we get through this technical stuff, I will disengage my propeller head and get on with fun stuff like film film festivals.

How To Record Your Own Foley Tracks At Home
11 Steps Required to record your score with an orchestra in Macedonia – a Guerilla Masterc...
Top Ten Things To Consider When Mixing The Sound For Your Film In A Professional Dubbing T...
DVD Cover printing - How to do it
Nine ways to create a world class sound mix for your film
Sound Mixing your film: Top Fifteen Tips For Working With The Professionals
The mountain lies ahead and my feet feel heavy…
Archiving BetaSP tapes onto DVCam…. Problems