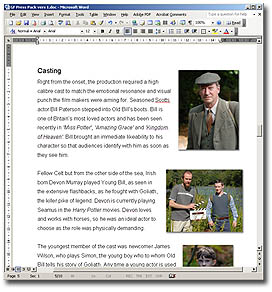 Over the last few days, we have been thinking ahead about the press for Gone Fishing… And I have been compiling a press pack for journalists. A press pack is a document that has information about the film, how it was made, and who the key players were in its making.

I have chosen to approach the press pack in a slightly unusual way, presenting it like a ‘story’ of how the film was made, with key interviews interwoven. I am in contact with some of the people involved in its making, and will update it when I get their quotes. Journalists love quotes as it gives the impression to the readers that the journalist has in some way got special access.

The press pack will also be updated every so often – when we get good press quotes, and hopefully, if and when we win some awards. If you are at all interested, you can take a look at version 1 of the PDF here. I stress this is version one, and it will be updated in due course (no doubt my dyslexia will also have resulted in some hilarious typos that will get corrected!).

A press pack always includes photos too – and we now have a page on our website where journalists can download hi res images from the making of the film – you can check it out here.

How to organise, run and host a successful film premiere: Top 21 Tips
Top 13 Things To Do When Being Interviewed for Radio About Your Film
Gone Fishing on Korean Fishing TV channel!
50 Kisses HUGE Box Office Success... The numbers are in!
Planning the sound re-mix tweak
Dolby Licence is secured for 35mm prints of Gone Fishing