By Chris Jones on February 4, 2008 in BluRay, Software 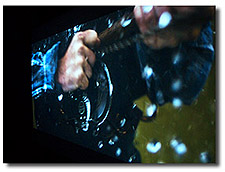 And in fact, proof of workflow too! Yes tonight, I burnt my very first BluRay test disk of a clip from ‘Gone Fishing’ – AND IT WORKED…!

PROPELLOR HEAD ALERT! READ ONLY IF YOU ARE A GEEK LIKE ME!

I can report that the high definition does in fact make a HUGE difference when viewed properly. Perhaps this is not so visible on a TV but on my digital projector, it’s awesome with no pixilation, no digital artefacts, and razor sharp images – I can even see, very clearly, film grain (pic here is from my BIG screen!).

To get to this point has been a major uphill struggle as it appears no-one seems to know what they are talking about when it comes to mastering HD onto a domestic format. Even Sony, who have tried to get to the bottom of my questions, have scratched their heads at times. It seems like there are all manner of ways to do it if you are uploading from a camcorder, with just stereo sound…. But as soon as you say surround sound and working with uncompressed HD, people look at you in horror.

I have been using Adobe Encore CS (vers 3) to master disks, with its own unique twist (I had to master in 25i, which is in fact 25P delivered in two separate interlaced chunks – and as the image is progressive to start off with, it makes no difference at the end).

So here is how I did it… or rather how I will do it now I know it will work.

The movie was mastered at Midnight Transfer and exported as a 10bit TIFF stream, each of the 20,000 fames being just over 11mb (saved at 1080 x 1920 progressive images). I would use an NTFS formatted drive if I did it again (see earlier posts for general hair pulling).

I then used Avid Media Composer (software only version) to import it into a 25P 1080P project (not a 24P project as Encore currently does not support 24P properly – it does support 24P in NTSC, but it actually converts it to 24P into 29.97 FPS when it encodes, which frankly, is pants).

I imported it into Avid at the DNX185 resolution for the tests, but when I redo it over the next few days, I will do it at 1:1 10bit uncompressed. This will maintain maximum fidelity in the images. Taking the TIFF stream into the Avid took 5 hours. This is the firsat glimpse of how much data and power is needed to handle true HD, not 25mbit HDV passing itself off as true HD.

It didn’t speed up or slow down whether it was being saved as DNX185 or 1:1 so that implies that speed bottleneck is the USB2 drive and not the Avid. As for playing back, forget it, it just could not handle the bandwidth.

Once on a timeline, I exported a Quicktime reference file, which was created in seconds.

I could then take it into a BluRay project in Abobe Encore, which was set to PAL / 25i / 1080 Blu-Ray. I already had the sound from the DVD I made, so that was already in place (see earlier posts). I dropped the QT reference file on the time line and then selected the rendering settings.

I chose the best quality, with 2 pass encoding and using H264 compression and not MPEG2 as I have read it gives better results. I hit RENDER… and I waited. On my Dual Core 2.4ghz / 3GB RAM new PC (and I think it was using both cores) it took about one hour render about one minute. Remember, BluRay is physically six times bigger than PAL DVD files.

The big question I had was how would the disk burn and would it even play? 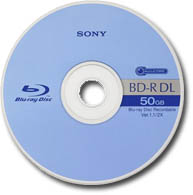 Blank BluRay disks are about a tenner a pop, with re-writable disks costing a few pounds more. So of course, I tried a RW disk first. And it worked without a problem, both in my BR burner (which costs about £160) and my Samsung BluRay player, which can be bought on the web now for about £250.

So that’s that short tale without the many, many headaches I encountered on the way.

I am just waiting now for a few new frames from Midnight Transfer and I should be able to build my final BluRay disk!

I just spoke to Eddie the editor and he commented on how amazing it is – you can now shoot and master to HD, even present in full HD in the home, with amazing surround sound too.

Top Ten Things To Consider When Mixing The Sound For Your Film In A Professional Dubbing T...
Reflections on the world of Gone Fishing
So the drive for the Oscars begins…!