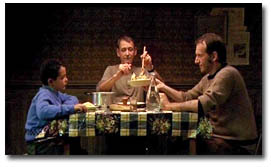 So the Oscars 2008 have come and gone, and while all eyes have been on the big players, I have been watching the shorts. I am delighted that a film that ENTERTAINS managed to walk away with the gold statue last Sunday night. It bodes well for Gone Fishing.

French film, The Mozart of Pickpockets is, by all accounts, a tight, engaging story that resonates. It’s long for a short film at over 30 minutes, but I guess the Academy warmed to that. This is all good news for Gone Fishing and our chances in the 2009 Academy Awards. If feels a long way off just now, but I know it will be here sooner than we think, and who knows what will happen between then and now… How exciting…

In fact looking down the list of nominees for the Oscars, it’s clear that the Academy favours films that entertain while delivering their message. For me this is in stark contrast to the BAFTA nominated shorts which I saw last week, where three out of the five (in the live action) steadfastly refused to Entertain while delivering their message, choosing hard hitting and gritty social realism instead. Don’t get me wrong, ‘Soft’, ‘Dog Altogether’ and ‘Hesitation’ were all extremely powerful films. It’s just after seeing any one of these films, I would feel depressed and shell shocked. And after seeing them all, one after the other, I felt positively suicidal. Friends will confirm the fact that for days I could hardly function I was so depressed. The fourth film, ‘The Stronger’, which was really a stage play committed to film (and a monologue at that) was simply not my cup of tea at all. I just didn't understand it.

The only shining star was the fifth film, an entertaining, if a little long (in fact most of the films were too long in my opinion) comedy short, and for me, the best film – ‘The One and Only Herb McGwyer Plays Wallis Island’ – you guys should have won the award. Maybe it's just becuase I smiled for 20 minutes while watching 'Herb' – it was like giving my soul a breather.

It will be interesting to see how the BAFTA’s unfold in 2009 and I truly hope the very best film wins. If you get a chance to see any of these five BAFTA nominated shorts, I urge you to do so. It’s an education.
Onward and upward!