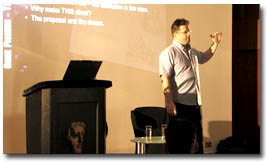 For the last month or so, editor James Barham and I have been working on the Gone Fishing seminar DVD set. It’s been much more work than I had anticipated, but we have now done an edit on the whole ten hour event.

It’s really turned out to be very good. In fact, better then we had ever hoped. The DVD seminar is best ‘done’ or viewed in a single day (or over one weekend), with a few friends – it is interactive and viewers are expected to get involved, discuss in a group and make notes, so that they can fully ‘own’ the experience. The real value of this seminar is that in doing it, you feel like you made the film itself and therefore fully own the lessons learned during the production.

I have bought and watched every single ‘film making’ DVD there is out there, and I can say that very few can compete with the depth of information we have delivered in this disk set (and those that do cost over $400!).

We are just making and testing the first DVD, of what we expect now to be a six disk set. I am still not sure what to call it, but ‘Making Your First World Class Movie’ comes to mind… Maybe we will go with something else. We have yet to set a retail price, but given it’s on six disks and comes with its own book, it’s going to be closer to £100 than I had initially expected. I have to pay VAT too, and unlike others, I list the prince inc VAT and swallow the VAT myself (rather than adding it on when you come to payment which always annoys me).

If you want to know more about this DVD box set, then drop me a line at mail@livingspirit.com