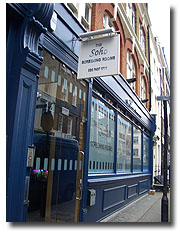 I went to My Youngs screening rooms yesterday (aka The Soho Screening Rooms on D’Arbly Street, W1), to test the BluRay disk I made in Adobe Encore.

One of the problems we have right now is that to screen Gone Fishing in all its HD splendour and full uncompressed audio means hiring in expensive HDCamSR decks – that’s £400 a day, plus the cost of the technician an theatre – and to do multiple screenings, it’s quickly going to become more expensive than the film actually cost! The 35mm transfer is coming along, but it’s still not there. Hopefully next week we will be slipping in at Cinesite, between Batman and Harry Potter.

BluRay seemed to be the perfect alternative HD format. It’s cheap to create and reproduce, and players are becoming more common (in fact I could actually take a player with me wherever I go). So the idea was to test how it looked, out in the wild so to say, at Mr Youngs. The first acid test was to see if it would play at all. Rather entertainingly, in the high tech projection room I saw that they were actually playing back BluRay from a PS3!

Bur it played just fine, in full 1080P – and it looked and sounded terrific too. The guy who runs the place, Colin, explained that the whole building works on component video, so it’s an analogue signal that goes to the projector. He explained that they did try HDMI on occasion, but they have had problems with the digital copy protection, so they abandoned and went for component only. Apparently, BluRay is very common with American film makers as it’s cheap and easy to bring over on a plane, and the whole PAL or NTSC thing just does not come into play. Makes perfect sense.

So good news then, we can present Gone Fishing in full HD and in a professional theatre that film business people are familiar with. And it’s good news for Indie film makers too as it’s a way to present your work without it costing an arm and a leg.