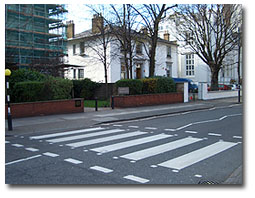 I just had a strange experience. I set up a meeting with BluRay guru Richard Osborne at Abbey Road Studios and tubed over – I hadn’t realised just what a Mecca that zebra crossing outside the building is to Beatles fans and tourists. I had to fight my way past giggling groups of Japanese women all of whom kept walking across the road excitedly and holding up traffic. And the walls were covered in fan graffiti. Amazing. And then I found I was walking in through the front doors, under the jealous gaze of a few fans outside. There is a history of Abbey Road Studios on Wiki here.

You may know that I have mastered my own BluRay disk, but there were a few problems with it. I used Adobe Audition and I could only master it in 1080i / 25i (not progressive scan). This meant speeding the picture and sound up by 4% and also delivering the image in an interlaced format. Actually the picture looked great as I mastered it from a TIFF stream directly off the hard drives at Midnight Transfer (who did the grade). But it was the sound that was disappointing. After going to all the trouble of doing such a great job at Videosonics, the best I could achieve with Audition was a Dolby Digital 5.1 AC3 file at 400kbs – which meant a huge amount of audio compression. BluRay can deliver completely uncompressed 24bit sound. So acoustically it should be awesome. And off my disk, it was good, but not THAT good.

Richard, a contact Eddie Hamilton had made, offered to re-master the BluRay disk after he found out I was having so many problems. These guys don’t mess around – they work directly from the HDCamSR tape, with full 4:4:4 sampling and uncompressed 24 bit sound. Effectively, there is no way to make a higher quality disk. Richard will also master the movie without copy protection so that I can copy it myself and make more BR disks from that single master disk.

Best of all, they have an AMAZING screening room with speakers about as big as, er, me! Richard reckons it’s going to be a couple of weeks turnaround. I CAN’T WAIT.

Nine ways to create a world class sound mix for your film
Top Ten Things To Consider When Mixing The Sound For Your Film In A Professional Dubbing T...
11 Steps Required to record your score with an orchestra in Macedonia – a Guerilla Masterc...
Sound Mixing your film: Top Fifteen Tips For Working With The Professionals
How To Record Your Own Foley Tracks At Home
Creative Partnership to get involved in Gone Fishing Poster
Cannes Cannes Cannes!