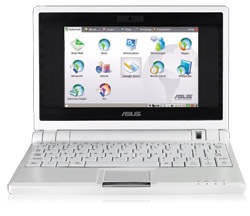 For years I have been in search of a portable computer. Powerful enough to do what I need, small enough (and tough enough) to carry in my bag without really noticing it. I have tried all kinds of devices in the past, and I just bought an Asus EEE – a tiny laptop that has no hard drive (uses flash memory) and runs Linux (though could run windows, even MacOS, but I think it would become interminably slow with either).

It’s pre loaded with a Linux OS, plus loads of software like Open Office, and so far, everything I have thrown at it hardware wise, has worked first time – USB mouse, Bluetooth wireless keyboard, Bluetooth wireless presenter, USB memory sticks, USB hard drive… And it has to be said, Open Office is astonishing! It’s open source free software, and to anyone who needs all the functionality you would normally use day to day in MS Office, it does the trick, and very well too. I was blown away by the Powerpoint style presentation module which even ran with my Bluetooth presenter. To me, it feels just like I am using Powerpoint. This means I can carry my presentations around with me anywhere I go, and be free to update it on the road.

And it’s the same deal for scripts too, though I have to figure out some way of converting between formats.

I bought this really because I can see that over the next year or so, I may have some long breaks away from the office, maybe sat in hotel rooms or airport terminals, and I wanted to use that time. Also, it makes writing the blog (like this first test one from a coffee shop) very easy on the road.

The downsides of this diminutive marvel are all plain to see. It’s small, which does impact on it’s usability for longer periods (though I now have an external mouse and small but full size USB keyboard for my luggage). But you know, I can’t have my cake and eat it – ‘I want it small but not that small, no, no, no, that’s too big now, no, now it’s too small…’ yadayadayada…

Best of all, it’s cheap, the basic model EEE 700 coming in at £200, though I would recommend the EEE 701 (for a whole host or reasons I wont go into here). And yes I know there is a newer version on the horizon with a bigger screen, more RAM and faster processor, but what’s new? It is a computer after all!

Free Writers Tools!
Top Ten Things To Consider When Mixing The Sound For Your Film In A Professional Dubbing T...

Gone Fishing Seminar at Ealing Studios
On the road with EEE