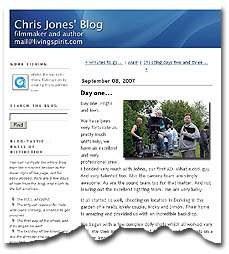 I have recently been asked to allow comments on the blog, and so from now on, I am going switch this feature on. So if you want to comment on any posts, feel free to do so, and let’s get some discussion going. There are a few new additions to the blog too. On the left there are a few short cuts to what I would call ‘days of distinction’, when something BIG happened.

There is also a search box so you can search the blog quickly, instead of having to trawl it.

Tomorrow I am setting up an Avid for a good friend who is shooting his first feature on 35mm – the script is absolutely terrific and I am delighted to be able to help on something that is starting from such a strong point, opposed to the more common rush to set with an under developed script scenario. I have been sworn to secrecy so I can’t say much, but I am looking forward to the outcome. If it’s as good as the script, it’s going to make some waves.

Pitching your screenplay and movie with Signe Olynyk
George Romero dies and we lose a legend... Watch the Making Of The Classic 'Dawn Of The De...
Festival Faces & Stories ~ Day Two of LSF
‘50 Kisses’... and the winner is...
David Yates, In Conversation
Veronica Mars Crowdfunding: WOW! Take a moment to acknowledge what just happened