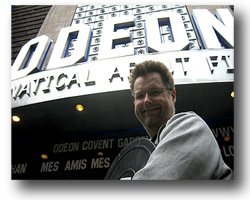 Today we had our screening of Gone Fishing at the Odeon Covent Garden. It was rainy and cold and so I was delighted when we had a bigger than expected audience turn out for the movie. It was part of the Super Shorts Festival, run and organised by one-man-power-house Stephen Follows. I also discovered myself in their magazine, and you can read a PDF scan of it here.

My good friend Matt Morreale filmed the event, so you can watch the video below – Matt runs a great film makers podcast site called The Film Producers Podcast and you can get more on that here. You should all join as he has some great guests.

The event ran for a couple of hours and the movie screened half way through. I was personally delighted as so many of the film makers who were involved in Gone Fishing that could not make the premiere earlier this year, managed to get here today and see it as it should be seen – on an enormous screen with big sound!

Feedback after the screening was terrific and several people came to me, off camera, to express how the film resonated with them on a personal level. For me that is what it’s all about – telling a story that impacts on a person in such a way that they leave with a lighter load on their shoulders and a smile on their face.

Anyway… here is the video… Just press the play button…

One Response to Gone Fishing at the Odeon!