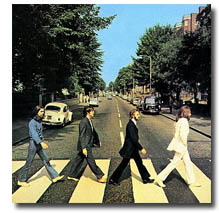 Today I went back to Abbey Road studios to meet up with Richard Osborne (pictured here) who was good enough to take on making the BluRay of Gone Fishing for us. Because of the Beetles famous cover album, photographed on the zebra crossing just outside, the studio entrance is always crammed with tourists. It’s quite astonishing how that album cover has created such a landmark for music lovers.

So when I got there, I watched the movie on their enormous 65 inch LCD screen, and as expected, the BluRay production was incredible – Richard REALLY knows his stuff. It was made from an HDCam tape (for pic) and Broadcast BWAV audio file (polyphonic, containing all six channels).

Picture was immaculate, and it also sounded superb because of the 24 bit uncompressed sound. Richard explained that they had done many high profile BluRay disks, including things like Elton Johns last concert, shot in HD – but the problem with HD formats at events like a concert, is that it’s so clean, it’s so sharp, it has so much depth of field (where everything is in focus) that audiences eyes are often drawn away from the centrepiece and onto other more trivial detail. It’s just so clear and sharp.

Gone Fishing, being shot on 35mm film, does not have this problem – rather it is clear and sharp, but audiences eyes are drawn to specific places in the shot because we managed the depth of field and focus to draw them to that point of focus. 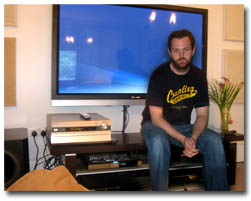 So Richard used Gone Fishing a few weeks back at an event to try and bring new customers to their facility, customers specifically in the feature market and not music business (for which Abbey are world famous). I smiled when he told me that Gone Fishing, looking and sounding so good, actually secured two new accounts with two major film distributors. WAY TO GO! He showed them the big action scene in the middle and when he paused it, they all demanded he allow them to see how it all played out. Pardon the pun, but it seems like they were hooked!

I was so pleased with the quality of the BluRay, it has started me thinking about an event – a kind of 35mm vs BluRay (for distribution on a small sale), because I have Gone Fishing post produced to the highest possible quality on both formats now. I am going to make some calls to see if I can set this up. The advantages of BluRay over 35mm for small scale distribution are clear, and I really do wonder, would anyone be able to tell the difference when projected in a cinema? And if they can, which would they prefer?