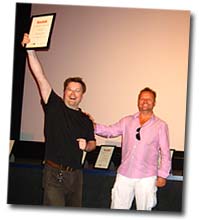 Yesterday was the official selection screenings of the Kodak shortlisted films at the Curzon West End. I have written a much lengthier blog entry to publish next week, after the whole event has ended, about my thoughts and feelings regarding the entire experience and the British Film Industry. For now though, this is just a short précis of events.

The day started with Sam Clark from Kodak giving each of the eight candidates a certificate for getting down the final eight. Seeing a photo opportunity, I held it high and grinned broadly – unless you were there, you just won’t know if the there were 10 people or 1000 people in the auditorium! As crazy as these kind of pictures are, they are very useful down the line in mythologizing both oneself as a film maker, as well as the film (the pic shows me and producer Ivan Clements and was taken by fellow film maker Suki Singh who is now making a Microwave feature film – good for him and I can’t wait to see the results! I also believe he cut a deal with Sam from Kodak while at the screening, so he is also making the difficult choice of shooting on film. Again, good for him! A good deal is always to be made at events like these). 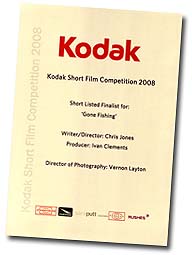 Gone Fishing on Korean Fishing TV channel!
The London Screenwriters’ Festival to receive £42,015 from second round of the Government’...
Video Postcard from the 50 Kisses Premiere
50 Kisses HUGE Box Office Success... The numbers are in!
Top 13 Things To Do When Being Interviewed for Radio About Your Film
How to organise, run and host a successful film premiere: Top 21 Tips
Watch The Kodak Awards Screening VideoBlog
Tonight is the night of the Kodak Awards!