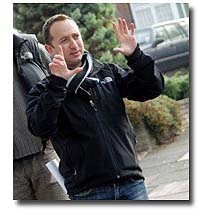 I wanted to take a moment to just acknowledge a few people involved in Gone Fishing, sometimes in a slightly lateral way.

Johnny Newman, a director friend of mine, encouraged me to make a short after he made his own short called Foster, which also played at Rhode Island! Johnny also encouraged me to enter Rhode Island, and the rest is history! Johnny has just completed his latest short, The Finkels, and all sorts of exciting stuff is kicking off for him – more on that when it happens.

Actor John Schwab, of the Reduced Shakespeare company, gave me the idea of asking everyone I nkew for small amounts of cash after I heard that he had raised money for his films. I know he has a movie at Palm Springs right now so that’s very exciting.

Andrew Sunnucks of Audio Network PLC ha supported us from the get go, and continues to allow us to use his excellent music in the video blogs.

And finally, director Simon Cox, who directed second unit on Gone Fishing, but who has also done the majority of the camera work for the video blogs. Simon has his own film going and a blog too. It’s called Kaleidoscope Man and you can read it here.

Of course there are hundreds of other people who need thanking, and I will get to each and everyone in due course.

Screw it, let’s do it! Top thirteen reasons why you should NOT wait to get your movie righ...
Super Hero Training Day For The LSF Team
Meet our youngest delegate at the Guerilla Filmmakers Masterclass... and watch her Virgin ...
What REALLY makes a film maker successful? One simple strategy...
Top Tips For When Being Interviewed About Your Film
Why you are not successful yet. The truth.
IMDb Rating Finally In!
Rocketboy development…