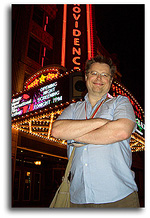 For those of you who missed the whole Gone Fishing World Premiere at the Rhode Island Film Festival on the blog, here is the whole edited Video Blog, one Webisode after another.

I wanted to document the journey for other film makers who had not yet attended a major international film festival – so it’s the sights and sounds, as well and what I hoped would be the glam and the glitz.

And did we win?

You will need to watch to find out…

Webisode 1 – The Journey
The long journey from the UK to Rhode Island, and thoughts on the way

Webisode 3 – The Opening Night, Continued…
The screening of Gone Fishing in front of 2000 people… what did they think of it?

Webisode 4 – Prints, Panels, Posters and Parties
The other stuff that goes on at film festivals and why all film makers love it!


Webisode 5 – The Closing Night Films…
Gone Fishing screens on 35mm in front of a capacity audience on the closing night of the festival..!

Webisode 6 – The Awards!
It's getting VERY exciting now!

What a jorney… If you enjoyed this video blog, drop me a line to let me know, so we can stay in touch and keep going on the videos…mail@livingspirit.com

Tomorrow I Fly Out To Finland for the Tampere Film Festival, and maybe the Northern Lights
Watch the short film that catapulted director of Blade Runner 2, Denis Villeneuve, to the ...
The 2 second film festival poll with live results... are they worth it?
50 Kisses HUGE Box Office Success... The numbers are in!
Short film opens doors in LA for Brit Film Maker
Short Films on the film festival circuit, a view from one film maker... Chasing Cotards
Emails about the Rhode Island Film Festival
The Road To The Oscars

12 Responses to Gone Fishing at Rhode Island, the complete Webisodes…