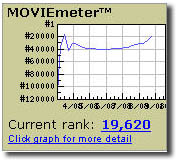 So the first IMDB test went well… ish. Yes, we did manage to impact on the MOVIEmeter, and we went up by 30% or so for two weeks in a row. I suspect about 100 – 200 people actually voted. So to make a really big impact, it’s going to take several times that many people.

Now the really strange thing – the user rating is still ‘awaiting 5 votes’. Now I know this is just plain wrong as I know many more than 5 people who voted – I have heard rumours that IMDB actually ‘rate’ the voters, and I suspect anyone who has only one vote in their account, won’t get a very good rating. So if you feel like doing it, spend a lunch time voting on 10 or 20 of your favourite movies. If you do this, can you drop me a line at mail@livingspirit.com so that I can have some accurate figures that we can process and share in due course. If you don’t remember how to vote, my original post is here.

And just a reminder of how the film business thinks. In each film makers profile on IMDB, they have a popularity chart. On the chart there are little symbols to represent certain events – in fact only a few events. This is what IMDB tracks… News Item, Theatric Release, Oscar Win, Oscar Nomination, Death… That’s it. So now you can see just how important it is for us to get the Academy Award Nomination…!

UPDATE! – Creator of IMDb, Col Needham just got in touch and said…

Thanks for the kind words about IMDb. The reason the votes haven't been counted yet is that a film must have a release date on IMDb before the rating is published. Until the first release date all votes are held in limbo. This is to stop "fanboys" from stuffing the ballot for their favourite unseen titles before they are released. We've queued up and updated to add your July LA screenings and the upcoming Oldenburg date so the votes should be counted & live within a few days. Good luck with the rating and the film! I guess things didn't quite turn out as you predicted with respect to IMDb vs MS Cinemania in your 1995 Sight & Sound article 🙂
Col Needham Founder & managing director, IMDb

That’s right, though I don’t recall the exact specifics of how I was completely wrong about IMDb, in my write up in Sight and Sound, I do stand corrected, a good decade later! Thanks Col…

One Response to IMDB test one done… ready for test two?