The schedule for the evening went very behind today, and so what should have been a seven o’clock kick off for the closing night gala screenings, became an eight o’clock kick off. The queue around the block was astonishing! Really, a thousand people queuing to see the movie for over an hour. So when they finally got into the air conditioned theatre, they were ready to sit down and be entertained. Super! 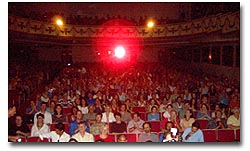 First off, the movie looked AWESOME on Kodak Premiere stock. It was big, beautiful and smacked of MOVIE, something the HD films seemed to lack. The dirt, grain and weave, all of which are ‘faults and problems’ with film, simply served to inform the subconscious that Gone Fishing is a movie in the great popcorn munching sense of the word, and not a new, shiny and super clear digital film. I think that worked in our favour.

The reaction from the audience was simply overwhelming… I asked them to cheer for the Associate Producers if they liked the movie – AND THEY ROARED at the end! Wow! I don’t mind admitting, I was very moved by that and shed a tear. As people came out, they said the most wonderful things and seemed genuinely moved by the story.

Later we went on to the after screening party at an outside bar with a stunning waterfront view of the night time city. And I realised that everyone I met was telling me how much they loved the film, and 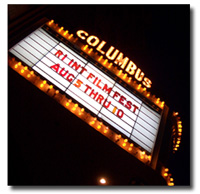 wanted to shake my hand. It really is gratifying to know that we have made something that really does touch people – so much so, they often felt compelled to share their own personal, and sometimes very intimate stories and meanings behind their experience of the film. This is what it’s all about for me.

And yes, the pic (right) was taken lying on my back outside the theatre (you will understand if you saw the video).

The audience awards will be announced in a week or so (as some films have yet to be screened and the votes counted), but tomorrow are the big awards over a breakfast brunch…

Short film opens doors in LA for Brit Film Maker
Canon 5D MkII versus Film in the real world… the result?
The debate rages on... What value is there in Art Film?
What materials do you need to enter a film festival?
How Getting Involved In A Community Film Festival Can Inspire You As A Film Maker
Something joyous and something wonderful…
Gone Fishing… The Final Awards… Did we win BEST FILM?

3 Responses to The closing night screening at the RIIFF