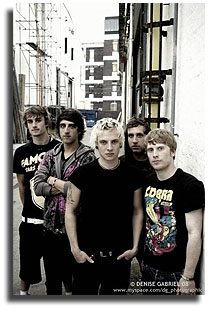 Over the last week or so I have been producing a music promo for an emerging band called The Silence Within. They are from the Kerrang school of music, so think NuMetal, Linkin Park etc. They are also a good looking bunch of lads, so we have high hopes for them on Kerrang and Scuzz channels. Pic by Denise Gabriel.

The song we chose is very catchy, and you can listen to it here on their MySpace page.

Over the next few days we will post a link to the video, but we are also making a video diary of the ‘Behind The Scenes’ which I will also post.

We shot the video on stage 1 at Ealing studios, and it included a six foot female Terminatrix in leather, a huge audience, ear splitting PA’s and of course, lots of smoke… Nice!

I look forward to your feedback!

Urban Ghost Story, the making of... And the complete soundtrack by Rupert Gregson-Williams
11 Steps Required to record your score with an orchestra in Macedonia – a Guerilla Masterc...
Notes for emerging composers… how to get noticed by producers
Yesterday, Polish composer Wojciech Kilar died
Low Budget Horror… You should use the Shepherd’s Tone to ratchet tension in your soundtrac...
The top 8 most influential and distinctive film music composers of all time