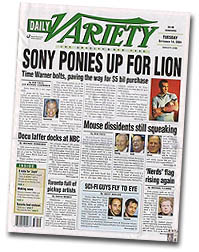 During the festival at Dinard, I made a whole pile of new contacts and built some good new relationships. One new relationship is with a reporter from Variety magazine, and over dinner on the closing night, we discussed among many things, the Oscars and Gone Fishing. He said he would see if he could put something in the article that he was writing about Dinard… And he did! It’s only a small mention which you can read here…

This article then precipitated contact with Miramax, who contacted me yesterday expressing interest in seeing the film. Of course I am happy to send them a DVD but I am trying to set up a screening on 35mm in Soho. It’s so much better (and easier) to be invited than it is to bang the door down.

This is terrific news and really illustrates that what you get out of these events is rarely what you expect, and often better than you imagined! Awesome.

Mankind Is No Island, Interview and Film
Short film opens doors in LA for Brit Film Maker
The number ONE reason I encourage filmmakers to go to film festivals
The debate rages on... What value is there in Art Film?
Using video blogs to share your film experience... Rhode Island from the archives
Dinard, the analysis…
More opportunities arise out of Dinard