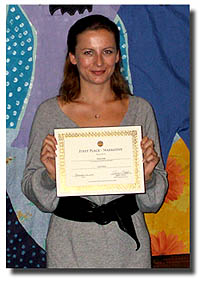 Can you believe! We have won another film festival! This weekend in Los Angeles, Associate Producer Kerry Finlayson attended the My Hero International Film Festival awards on all of our behalf, and she was delighted to collect the Best Narrative Film Award.

This is a particularly wonderful award for us as the My Hero Festival is all about inspiring and aspirational stories, many of which are very challenging documentaries from around the world (Gone Fishing won the Best Narrative Fiction and was not competing against documentaries).

‘It was an amazing event, very eye opening as to what is going on in the world. Almost all of the categories had films that made you think outside of the bubble and the comfort zones that we so often find ourselves inside. Also, the hardships that are around us and the unity of people in the world that are trying to make it a better place…’

Kerry shot a video of the event which is winging its way over via FedEx right now, and we hope to have it edited and up on the blog very soon.

The number ONE reason I encourage filmmakers to go to film festivals
The 2 second film festival poll with live results... are they worth it?
The top six film festivals in the world, based on my experience... and none of them are A ...
Subtitles for Festivals
Day 1 at Incubate in Tilburg
Tomorrow I Fly Out To Finland for the Tampere Film Festival, and maybe the Northern Lights
SELL BABY SELL!
Chat track recording for the DVD release… all done!