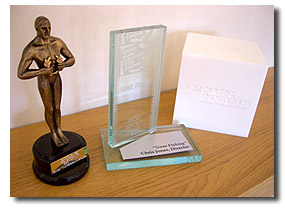 The Thunderclap award arrived in the post the other day, and it’s now sitting on my shelf next to the Rhode Island Award and the curious TCM White Plastic Cube Award we picked up a few weeks ago. The Kodak award is a plaque and is on my mums wall, amusing the neighbours.

I just got a mail from the Thurderclap boys, and they were nice enough to say in their extended press release…

Hello. Kirk Monteiro from Thunderclap here. That was a quote from Chris Jones, who was overwhelmingly voted the winner of the British Thunderclap Award 2008 with his beautiful film "Gone Fishing". We've got some exciting news we thought you'd like to hear about a brand new Chris Jones, project, news from the Blaine Brothers who came second, plus vampires, money, nights out and more from the world of British independent film… Read on!

New Chris Jones feature in development – "Project Nightwatch"
The big exciting news this week is that Thunderclap Award winner Chris Jones has announced the launch of his new project, a feature length ghost thriller currently working under the title "Project Nightwatch", which he's been quietly mulling over for a few years now and is due to start shooting in February.

It's been a while since Chris has shot a feature. He certainly proved his worth with the low budget thrillers "White Angel" and "Urban Ghost Story" several years ago. However, since then he's found himself sidelined into writing the very popular Guerilla Film Makers series of books, and away from the actual directing and producing of films.

But he's now back at the helm of a feature, and we wait with baited breath to see what the by now very experienced and knowledgeable Mr Jones is able to produce in "Project Nightwatch".  His recent Thunderclap Award winning short "Gone Fishing" has shown he's developed much as a film maker since his previous features. We're expecting a beautifully shot, finely crafted and captivatingly chilly story.

We'll be following the development of this film very closely and sharing with you Chris's thoughts and experiences from beginning to end.

Newsflash – Blaine Brothers really nice guys!
We told you a couple of weeks ago how Chris Jones, the winner of the British Thunderclap Award, gave a special mention to the Blaine brothers, who came second with their short comedy "Hallo Panda".

The Blaines have returned the compliment with this special mention to Chris on Ben Blaines Blog:

That's what I love about the British independent film makers scene.

Rather than the back-biting bitterness that can often be found in other media industries, our scene is very much full of people like Chris Jones and the Blaine brothers, who realise that we're all one big creative family and are always there to support each other. It's truly uplifting to be part of such a nice guy network!

Let me join in this happy back slapping and say that The Blaine Brothers, Chris Jones and all the nominees in this years Thunderclap award truly deserved every single vote they got.

50 Kisses HUGE Box Office Success... The numbers are in!
Video Postcard from the 50 Kisses Premiere
The London Screenwriters’ Festival to receive £42,015 from second round of the Government’...
Meet The Nativity Wins 'Best Festival' Film at 22nd Jerusalem Awards at BAFTA
Calendar Girls Done…
Gone Fishing now on DVD!