Watch the video before reading…

No really, watch it! OK. So we won. Against stiff competition too, 20 films in all. It was a great evening which went on into the warm Bahamian night. This has been a great festival and I have been lucky 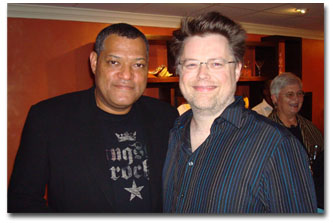 enough to make lots of new American friends who I plan to look up next time I am in LA and San  Francisco. I also met Laurence Fishburne who was extremely articulate, charming and smart. Blimey!

I was really overwhelmed too, by the amount of people who seemed genuinely delighted that our film had won, and it was very humbling as many of them had themselves made great movies and walked away without an award. I was also amazed at how many powerful Industry people were here, and all of them wanted a DVD of the film – good job I had 20 'NTSC screener' DVD’s in my bag! There is even the glimmer of several new opportunities that have arisen from the whole rollercoaster – don’t want to say anything yet, but let’s see how things evolve. 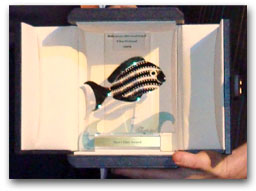 The trophy, which is really stunning, is going to be engraved and forwarded on to us later. I can’t wait to get it onto the mantle piece!

Right, I need to sleep now, and when I wake, it’s back to writing my script!

50 Kisses HUGE Box Office Success... The numbers are in!
Meet The Nativity Wins 'Best Festival' Film at 22nd Jerusalem Awards at BAFTA
The London Screenwriters’ Festival to receive £42,015 from second round of the Government’...
Video Postcard from the 50 Kisses Premiere
Gone Fishing at Rhode Island, the complete Webisodes...
Postcard from the Bahamas
Bahamas, the complete webisodes…

11 Responses to And the award goes to…