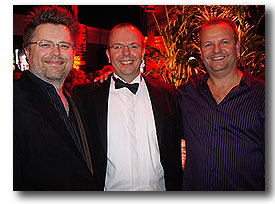 The BIFA’s came and went, and sadly, we didn’t win best short film. It was won by social realist drama ‘Soft’, about a group of hoodies terrorising a boy and his father.

We didn’t shoot a video at the awards as BIFA told us, strictly no cameras! It was star studded for sure, and with James Nesbit hosting, cracking very personal gags smattered with four letter expletives, I can see why there was a ‘no cameras’ policy. It was very entertaining though!

I was delighted that Danny Boyle’s outfit won ‘Best Film’ for Slum Dog Millionaire as it’s a film with aspiration and optimism. For me it stood out among the other films, although all the features nominated were excellent movies. Very high standard indeed.

The highlight of the evening for me, was meeting Col Needham and his delightful family. Col set up the IMDb many years ago and was one of the Jurors at the BIFA’s. After the awards, we bumped into each other and he shook my hand, confiding… ‘I don’t know if I should tell you this now it’s all over, but I voted for your film…’ What a nice guy!

At the awards, I also bumped into the very lovely Martin Butterworth from Creative Partnership who so kindly designed our poster for us. He was delighted that we had been nominated and reminded me that my original goal had been the Oscars… So it’s all fingers crossed for the shortlist which will be announced some time in December!

Meet The Nativity Wins 'Best Festival' Film at 22nd Jerusalem Awards at BAFTA
The London Screenwriters’ Festival to receive £42,015 from second round of the Government’...
Gone Fishing at Rhode Island, the complete Webisodes...
50 Kisses HUGE Box Office Success... The numbers are in!
Video Postcard from the 50 Kisses Premiere
Video Postcard from The My Hero Film Festival in LA (with some technical difficulties!)
Christmas Push for Gone Fishing

One Response to And the award goes to…