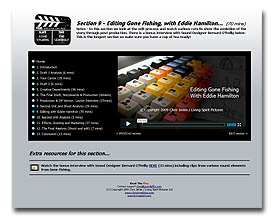 I am delighted to announce that the Gone Fishing seminar that we shot at BAFTA, at the premiere, is now live on the internet. It’s taken us some time to get it all constructed because it’s so detailed and dense with information. We also went back and reshot some inserts too. But the big reason, is that we were waiting for the outcome with the Oscars (as some content raises the lid on how the Oscars work and we didn’t want to jeopardise our chances by revealing this insider info).

The seminar reveals exactly how we made Gone Fishing, in such a way that anyone who watches it should feel that they were very deeply involved in its making too. I know from the feedback we have received that this unique approach creates powerful breakthroughs in both understanding as well as personal aspirations.

As part of my commitment to the Associate Producers on Gone Fishing, we are also going to run a further day of seminars, about what has happened since we completed the film, such as film festivals, sales, and of course we reveal the whole story of the Oscars (there are several blog posts we could not include at the time, like the one about how red laser pens are given to judges to facilitate sudden death screenings for films! I know!) 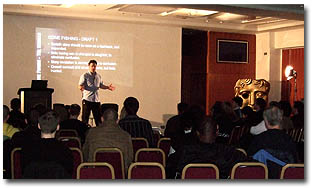 Anyone who signs up now will get all the extra features when we film them over the coming months (and depending on numbers, may also be invited to the live event for free). We hope that this will become a kind of evolving film school experience where students can come back and refresh, watch new content and perform new exercises. It’s a very exciting development for us and I can’t wait to get more feedback on it.

We are charging £69.99 for the seminar, which runs for over eight hours.

You can sign up here, or just read more about it on the site at www.gonefishingseminar.com

If you want to know how it has gone down, you can read the original feedback from the event (last Jan) here, and below is feedback from the video version we recently completed. It’s a mail I got from Danny Lacey, an emerging film maker who was one of the first ‘beta testers’, to make sure that the experience worked in digital form.

I've been keen on the thought of making movies from a young age. However, it wasn't until more recently (my early thirties) that I finally decided to really give it a go. It was just over two years ago that I set my film making goal – to write and direct a 'blockbuster' movie within five years.

Here's the problem – I had many ideas for what I think would make a good movie, but absolutely NO experience of getting one made or even writing a screenplay!!! This was to be my first major hurdle. So I decided to get busy and work hard on learning as much about the trade as possible.

I scoured the Internet, book stores, DVD retailers etc. to look at what resources were available for someone in my position. In the beginning I was spending a fortune on various books, downloading various podcasts and the odd training DVD but none of them really gave me what I felt I needed. What I really needed was an idiots guide, a step-by-step to the different processes of film making and things explained in simple terms!! It was then that I discovered the thick green book – the Guerilla Filmakers Handbook written by Chris Jones and Genevieve Jolliffe. This book is responsible for kick starting my training. The book answered all of my questions and really helped to clear up the film making process.

The next minute I'm making contact with the authors – I wanted more! Chris Jones then mentioned the Gone Fishing seminar. Chris very kindly offered to allow me to beta test the course. This is when I really started to get to grips with the process and also found myself utterly inspired!

The seminar is very cleverly structured and guides you through the many phases of film making. You follow Chris on his journey through making Gone Fishing, from developing the screenplay, storyboarding, pre-production, production, casting, financing, post-production and so much more. There is NO film making resource like it on the market.

The Gone Fishing Seminar videos have without a doubt aided my development as a film maker. I'm putting what I've learnt into practice when it comes to screenwriting and producing my up coming short movie projects. I no longer feel like I'm stabbing in the dark – I have a real sense of knowledge and confidence about my film making skills. I've watched all of the videos many times and often have them playing in the background whilst I'm working on various projects. Not only do you learn lots from the videos, it's also a massive source of inspiration. Watching Chris talking about his journey and sharing his knowledge with you will give you a very clear vision of YOUR journey through the movie making process.

This is the best £70 I've ever spent – I would have paid so much more for the many hours of valuable film education. You get an honest education without any pretence. Chris has a genuine love for film making and helping fellow film makers on their journey.