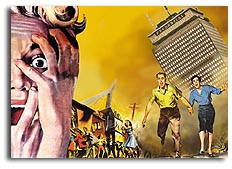 Last night I had my first one… Earthquake that is. The earth shook, the house rattled. Everyone stood very still for a moment. Apparently it was a 3 on the Richter scale, and the epicentre was right beneath us in Santa Monica. So another LA experience is chalked up!

Right now I am utterly exhausted. It’s a mix of jetlag, lack of sleep from the last week, but most of all, exhaustion from the last six moths work. I have been able to ‘put down’ the ‘Oscars’ bag, and that relief is palpable. And I have been sleeping like it’s a sport. I have also regained complete control over my own destiny (no more waiting for other people to decide on my destiny), and that is VERY exhilerating… Anyhow, here are some more wonderful messages that have been flooding in…

I just wanted to say that although you didn't get the Oscar nomination you have inspired me and many other film makers to dream, to get out there and do it and achieve.  You've won several wards at noteworthy film festivals and you have put yourself on the map as a dedicated, motivated determined filmmaker with a sense of integrity and ethics second to none.  I admire you.
Alexandra Denye, Film Maker and Writer

I think it's amazing that, out of all the short films being made on the planet (and there must be thousands!), you took the project that far. That's an incredible achievement to be in that top ten. Period. What you've done is given lots of film-makers a massive encouragement boost and an example to follow. It's a beautiful film in so many ways and it will be remembered for a long time, simply down to all the hard work and passion you put into it. Thanks for making Gone Fishing.
Rhys Hayward, Film Maker

You made a hell of a run at it and have still inspired me greatly. You are the new Chuck Norris as far as I am concerned.
Darren Horne, Film Maker

Although the news is sad…it is quite moving.  It is moving to see your energy field through the entire process.  I have kept every single email blast and I can't tell you what a neat venture you have spread through the world.  I've only come to know you through your writings and webblogs…. I KNOW that this will ONLY bring you to your next amazing venture!   I am absolutely thrilled for you…for this….for everything that is in you at this moment.   Yes, UPWARDS! ….and really, REALLY UPWARDS!!! Many hugs and many cheers,
Tania Montenegro, Rhode Island
(who worked at the Hotel in Rhode Island when I was there, and has quit her job to chase her dreams! WELL DONE!)

I came across a quote from Kevin Costner.  He said roughly, "Dreams should be the last thing you let go of in life, not the first.  When your ship has sunk out in the middle of the ocean, and the life-raft has sprung a leak and disappeared from view, and you are clinging to a small, fragile log at risk of splintering any minute, the inscription on the log should read: DREAMS."  (You may know that his first role, in The Big Chill, ended up entirely on the cutting room floor!  I guess he should know.)

Without a doubt, recognition is lovely, but I think the awards are secondary.  What we do requires a big, open heart, a commitment to the Divine within us, a loyalty to being completely alive, risking … listening to, connecting with and appreciating Guidance.  And what you've been doing is encouraging us with your actions and modeling that commitment.  Please know that you are connected to us, important to us, and intimately Guided by love.  Very well done.
Leslie Diamond, Annapolis, Maryland, US

The great Green Bay Packers American football coach, Vince Lombardi, was renowned for words of wisdom, but the relevant one for this occasion is:-  "The quality of a man's life, is in direct proportion to his commitment to excellence, regardless of his given field or endeavour".  Your commitment has produced excellence, irrespective of whether or not the voters at the Academy think so. The feedback you have been receiving must show you that, and you can be justifiably proud.
David Talbot, Film Maker

I just wanted to add my few words to the countless other messages you have had over the last 2 days since the Academy nominations. I know you must be disappointed, but the feeling I get from the blog is that you have already gained something far more precious than an Oscar. There is a huge group of people out there who have been inspired and empowered by the journey that you have taken them on. You have shared the highs and lows, the lessons learned, and knowledge gained – and in the process created a priceless resource for others that might follow.

You have a whole community behind you – from all walks of life, who have been drawn into this journey with you – and what a journey! For every person who is touched by the film's story, there are many others who have been fired up to chase long-held ambitions through your example. Thank you for reminding me, and many others, just what is possible when you have passion, enthusiasm and committment – and may the months ahead continue to bring you the rewards of that. All the best.
Andy Robinson – Filmmaker, Exeter, Devon.

The phone rang, and from that moment, everything changed... PART 2
It’s not that shit happens, it’s how we deal with it that defines us
Top tips for directing when you’re the only beginner on set by Kat Wood
Waiting for the phone to ring? How one screenwriter took action and their film has just be...
Why complaining to your friends will get you nowhere fast...
First contact after the announcements…
Gone Fishing Seminar Live Online!