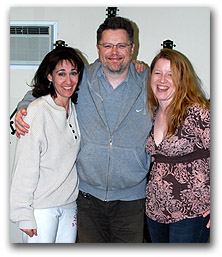 Last night I met up with a very old friend, Actress Harriet Robinson. Harriet played the lead character in our second feature film White Angel, and I lost touch with her in 1995. Now thanks to Facebook, I tracked her down – she had moved from London in ’95, here to LA. And so last night, Genevieve and myself headed out to the valley for dinner with her and her family.

Immediately it was like old times, discussing how things went wrong on set, when we played as the centrepiece of the London Film Festival and acting with Brit acting legend Peter Firth. We had a great time and it wasn’t long before we broached the idea of a sequel…  White Angel 2, The Angel of Death…

Very quickly we had talked ourselves into this being a good idea. Picking up form where the last film left of, with Ellen Carter, still writing, but now from her prison cell. And she is up for parole too, as is a serial killer with a dark secret…

There would be another benefit to making a sequel also – it would give the original film a new lease of life. We would need to remaster it in HD and remix the sound, but that’s all possible. All food for thought and a great night out!

If you are interested in seeing White Angel, you can buy it as a double DVD with Urban Ghost Story from our online store here – there are loads of extras on both disks too. (scroll down the page and its halef way down). If you want to read about White Angel, click here.

And it was all going so well... Or was it? Filmmakers, Screenwriters, Creatives... Are you...
Gone Fishing closes at the Santa Barbara Film Festival
Downtime in Downtown