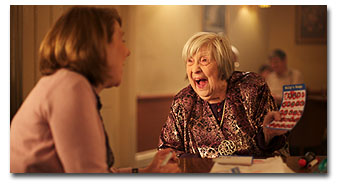 I just wanted to share an email I got from a fellow film maker. I met up with him last year for a coffee as he seemed ‘blocked’ in his next career steps. We discussed many of the issues I put into practice while making Gone Fishing, specicifally the carrer plan that forms one of the sections in the Gone Fishing Online seminar, and also some of the principles I work with during my film makers seminars… Anyway, here’s what he had to say…

I don't know if you recall, but we met up for a coffee and a chat last year, where I asked you for advice on the next step for my production company and my film making career.  Well, I took your advice and ran with it and I am proud to say that we wrapped on the shoot of our s16mm short film 'Numbers Up' two weeks ago.

The film is just under ten minutes long with a budget of £6k.  We managed to get a fantastic cast on board, an amazing and experienced crew, and even managed to get Tony Wright on board for storyboard advice and guidance.  What an amazing bloke, by the way.

I basically just wanted to say thank you for making things clear to me that day.  I was in a serious place where I could not see the wood for the trees and when you said that I needed to stop looking at the 'peak' and start focusing on the next 100 yards, it really did change everything.  You told me to set a budget and have faith that I would get it and that is exactly what happened.  I did not have a clue how I would get £6k or from where, but I knew I would and, just as you predicted, the universe saw to the rest.

It was a massively exciting challenge with a crew of 23, 4 cast members and 25 extras on the second day.  I was absolutely exhausted when we wrapped, as I had not had a full nights sleep for 6 months, but I was ecstatic.  I loved every single second of it.  It has changed my life.  I now believe 1000% that I will be a successful film maker and Sinead and I are already working on the next project, a feature film, as we speak.  I just love it.

Anyway, if you want to see a still from Numbers Up, please go to here…

Congratulations on your road to the Oscars.  It has been an inspirational journey and one that I have followed very closely.  I was really disappointed to hear you just missed out on the nomination.  All I can say is that I look forward to seeing you on the red carpet in the future.

Making 'Ink' with Jamin and Kiowa Winans
Where are you drawing your inspiration from?
The most important movie in my life was ALIEN... Here's my 'Prometheus' review
Modern Technology on Modern Man for Virgin Media Shorts
Oscar winning Producer Gareth Unwin and Oscar winning writer David Seidler: The Kings Spee...
Meetings begin…
Sedona International Film Festival IS A HIT!