By Chris Jones on February 17, 2009 in Festivals, Film Production 0 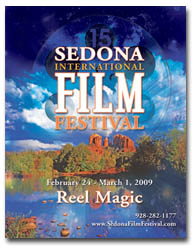 Sara has been busy submitting to festivals and we have had a huge response from certain groups. Broadly speaking, we have been unsuccessful in the UK and Europe, and very successful in the USA, especially California. We in fact have a nexus of festivals culminating in three, yes THREE award ceremonies in Arizona and LA a week on Sunday. If I drive like a maniac, I could make all three! What an amazing adventure that will be. Watch the blog for what I hope will be a crazy video webisode!

So I bought my ticket for LA last night, which is still only £170 one way at BA.com! I am going out to LA for these festivals, as well as hopping over to Australia for the Heart of Gold Festival, and also so that I can get more involved in my future career in LA. I plan to be out for about 8 weeks.

I thought I should let you all know about the incredible list of new festivals we are playing at, and we do hope that if you are nearby, you can make it to the festivals…

OK, we start off with one I am really looking forward to, the Sedona International Film Festival in Arizona. This is a very well respected festival and is in a stunning setting. I really can’t wait to get there! Add to that the fact that the organizers are really very nice and it has all the makings of a classic American film festival.

What is super exciting though is that at the same time, The Beverly Hills Short Film Festival and the International Family Film Festival are also running in California (just over the state line from Arizona), so the blog may well feature Kerry Finlayson, our resident LA correspondent (if I don’t make it over the State line in time).

I then have a three week break to do LA stuff and work on my script before heading up the coast to the lovely town of Tiburon, for their International Film Festival. Apparently there is a fishing themed prize! Let’s hope we are lucky. Directly after Tiburon, I hop onto a plane and head out to Eastern Australia for the Heart Of Gold Film Festival where I am also running my two day master class (revamped to include all the new Gone Fishing information). At the same time in the USA, the ON Festival, in the City of Norfolk, Virginia is also running, but I won’t be bale to attend (can you?).

When I get back from Oz, back to LA that is, (April 2nd) I go straight to the Lake Arrowhead Film Festival, just East of LA. Again, looking forward to this one, as I will also be tacking a few days to rest while there. At the same time, New York way, there is the Garden State Film Festival and also the Las Vegas International Film Festival! Yeah BABY Yeah!

Further down the line, toward Spring and Summer is the Calgary Underground Film Festival (May),  First Glance Film Festival Hollywood (May) and the one I am definitely going to, Short Shorts Film Festival Asia and Tokyo in June. Tokyo! Finally!

What materials do you need to enter a film festival?
How I Cast Brian Blessed, Joanna Lumley and Jack Davenport in my fantasy short, Guest Blog...
Mankind Is No Island, Interview and Film
Top Ten Kick Ass Tips For Shooting Action Horror From 'Zomblies' Director Dave Reynolds
The number ONE reason I encourage filmmakers to go to film festivals
Online Seminar Feedback Is Now Coming In…
The Genius In Us All…