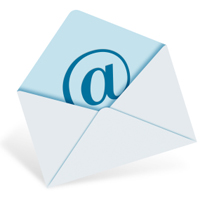 I have been working on the final section of the online Guerilla Masterclass about the making of Gone Fishing. One aspect we discussed is that of email communication. Clearly, it’s a fast and economic way to communicate.

But… it has many drawbacks.

I have just had some email communications in the last few days that really illustrates just how careful one needs to be. In fact I would go as far as to say that if what you need to communicate is important and not just ‘facts’, pick up the phone and make a call. The problem with email is that its soooo easy to be too direct, misunderstood and downright rude (even if you are not being rude, it can be read that way) – which of course makes YOU suddenly get all self important too, and before you know it, what was a simple email interchange has escalated to all out battle!

A case in point was today when a festival said that I had not given them all the info they needed, and I really should get onto it. I emailed back to say that I was unaware that my film was even showing! They emailed back and said that they emailed me some time ago – turned out that for whatever reason, they had a different Chris’ email address. A clerical error their end I can only assume.

I suggested they may have been talking about a different film, as there is another ‘Gone Fishing’ short out there, and when I asked Sara back in London, she did not remember entering this festival either. Maybe they had the other film, but no email, so had Googled it to find contact details and came up with my film, and so contacted me in error…? I suggested this… and this is what I got back…

We did not select your film because we googled it. We selected it because we watched a film and liked it…

Now, I have enough experience now to know now that it’s important to not ‘energise and emotionalise’ an email. It’s kind of like Road Rage, where you are in your little secure bubble and everyone else is a bad driver. So I call it email rage now! And we all seem to do it! The trick is to recognize it in both yourself and others.

So where possible, I try to get on the phone and make a call. It’s almost always resolved in moments then, person to person. It’s a MUCH better way to communicate efficiently.

Though I have had the ‘I don’t have time for calls…’ email too, which usually ends in a call some time later, but on much more difficult terms!

And the award goes too… ALL OUR ASSOCIATE PRODUCERS!
The difference between LA and London…