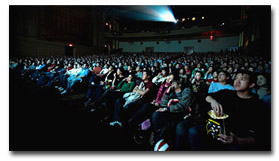 A bit of a mixed bag of festival frolicks on the blog today. Having just edited the Film Festivals section for the Gone Fishing seminar, some of the emails I received today reflect some of the issues raised in the seminar.

First off is a good example of Read the Fine Print (which is a section on the seminar). Here is a clause from the terms and conditions of a festival we were just applying to…

'No film may be withdrawn from the xxxxxx Film Festival programme after its selection / participation has been confirmed by the festival, and the film may not be screened elsewhere before its presentation in the Festival without the prior agreement…'

Blimey, sounds like a distribution deal to me not in invitarion to apply for a non profit film festival!

We also got rejected from a festival today too…

So that’s another European festival turning us down. Right now we are lined up for over 25 US based festivals, but we still can’t get into UK and European festivals. I can’t help but feel that Gone Fishing may be just a bit ‘too happy’ for some Euro fests. I would love to hear any other reasons why the rejection in Europe / Acceptance in the USA polarization is so distinct.

On the flipside, we just got this write up on WithoutABox too!

WABEES SHINE IN SUNNY SEDONA
Withoutabox filmmakers really stood out at the 15th Annual SEDONA INTERNATIONAL FILM FESTIVAL by winning 12 of the 16 prizes awarded! The honors ranged from "Best Feature Film" to " Most Thought-Provoking, Most Compelling and Most Requested Documentary," and WABees were the big winners. Special kudos to Chris Jones' GONE FISHING, for winning both the BEST SHORT FILM AUDIENCE AWARD and BEST FOREIGN SHORT FILM DIRECTOR'S CHOICE AWARD. His fish tale has tickled the funny bones and warmed the hearts of many audience members throughout his very successful run on the festival circuit. Congratulations to all the winners. We look forward to all your future achievement!

Finally, to add to the US festival roster, we just got into the Big Island Film Festival in Hawaii!

Using video blogs to share your film experience... Rhode Island from the archives
Day 1 at Incubate in Tilburg
Watch the short film that catapulted director of Blade Runner 2, Denis Villeneuve, to the ...
The top six film festivals in the world, based on my experience... and none of them are A ...
Subtitles for Festivals
FREE online seminar, 'Making Web Based Comedy and Films' with the Misery Bear Team
Starbucks is my new office!
Heart of Gold Guerilla Masterclass Approaches