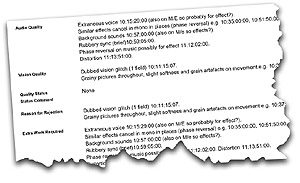 Those of you who have done my two day Guerilla Film Makers Masterclas will know I spend a great deal of time on sales and distribution. We face many problems making low budget films, and some bad ones manifest in the final sales.

One thing that many film makers don’t fully understand is that you will be dealing with your film for decades after it is completed. One such instance has just reared its head with a feature film I made in the nineties. I don’t want to say what film, and I don’t want to say which Broadcaster, but the film went through Quality Control and just failed it.

What does that mean? They bought the film, checked the master tape and rejected it on technical grounds. So we have no deal now unless we CAN supply a master tape that they find acceptable.

You can click HERE to see this QC report sheet (I have edited this so it’s not recognisable from the original, but the content remains intact). You will see the film fails on a number of points… And this is a film made and mastered over a decade ago, AFTER it has been screened by many other broadcasters around the world (and I am making this available so others can see just how rigorous technical sales specs can be).

OK so what does this all mean? Almost all of the sound problems are in fact creative choices. As are the picture problems too – though the grain is to do with shooting Super 16mm (IT’S FILM DAMN IT!).  The only fixable thing is the Dubbed vision glitch (1 field) 10:11:15:07 (so this is a glitch on one half of a frame, so that one 50th of a second of the whole film has a technical problem!)

The real dilemma I have now is how to get them to agree to accept this tape, or I could be forced to re-master the whole film (we will fix the glitch of course)! I really don’t want to re-master the film though, going back to the final mix and re-telecineing the picture from the negative. What a pain. This is a great illustration though of the technical problems that hit Indie film makers in sales and distribution. And over a decade later too!

Live Feedback From The Guerilla Film Makers Masterclass With #GFilm Hashtag
I started making films at the age of 64… Guerilla Filmmakers Masterclass
Tangerine: Shot on iPhone 5s and with near zero budget, the ultimate microbudget mastercla...
Top Ten Tips For Making Shorts from GFilm Alum Lee Greenhough
Catherine Hardwicke Genesis: How she wrote and directed her first film that led to 'Twilig...
How to produce your movie: Ted Hope and Christine Vachon at AmericanIndependentsDay.com
Heart of Gold Guerilla Masterclass Approaches
FilmSpecific.com's Stacey Parks interviews me!

One Response to Ghosts From The Past – Failing QC