So as I come down from the Sedona Film festival, I have edited both episodes together for a single webisode of the event. I finally got the audience statistics from Patrick, who runs the festival and here’s what he said…

‘Your scores were BRILLIANT here … 4.66 (out of 5.0) overall audience score! The highest we’ve EVER had for any short film in our (15 year) history! BRAVO

You were THE BIGGEST HIT at our festival! WOW! Everyone is still talking about our acceptance speech and calling your Mother! That was FANTASTIC!’

Reflecting on the festival, and adding to something I spoke about in the blog, if handled well, actually attending a festival adds an element of theatre to your film – this can clearly help when the awards are audience votes as if people like you, they are more inclined to like your film too. I have also had three d 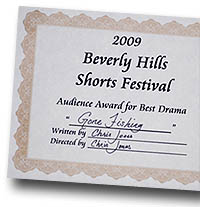 irect invitations form other festivals since Sedona, the organizers saying they watched the blog and wanted me to come along, which is very flattering.

Amazingly, on Sunday, directly AFTER Sedona, I flew back to LA to go to the Beverly Hills Shorts Festival where we won The Short Film Audience Award… I literally ran into the theatre as they read out…‘And the winner is Gone Fishing!’ I jogged to the stage to be handed the award… I was soooo late that I didn’t get any video or even a photo!

Using video blogs to share your film experience... Rhode Island from the archives
The Top FIVE Steps To Getting Your Film Funded
Short film opens doors in LA for Brit Film Maker
Day 1 at Incubate in Tilburg
Production Manager Gets Onboard
Sedona Part 2… AND THE WINNER IS!
Credit Crunch = AMAZING NEW POSSIBILITIES!

2 Responses to Sedona… The Complete Webisode…