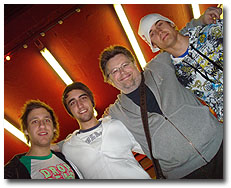 Last night I attended a screening of Gone Fishing in Worthing, on the South coast near Brighton. It was part of the End Of The Pier Film festival and run by Brian Gartside. I like Brian a lot as he is committed to helping film makers, so much so that the festival invests a portion of their profits into films and film makers. Gone Fishing played in a very eclectic program of ten other films, the highlight for me being a very clever and well constructed movie called ‘Mother Mine’, directed by Susan Everett.

Susan contacted me some time ago and sent a DVD as she had entered the TCM awards and did not get in the final six. On reflection, I thought her film deserved to be in the last six at TCM and was certainly, in my view, better than several of the other finalists. I am sure her next film will be one to watch out for.

I also met up with the Silence Within boys, the band how we made a music promo for last year. This was their home turf and they very graciously attended to support the film. They cheered and whooped like rock stars as the end credits rolled, so thanks guys.

The 2 second film festival poll with live results... are they worth it?
Mankind Is No Island, Interview and Film
Canon 5D MkII versus Film in the real world… the result?
50 Kisses selected for the Rhode Island International Film Festival 2014
Watch the short film that catapulted director of Blade Runner 2, Denis Villeneuve, to the ...
Short film opens doors in LA for Brit Film Maker

End Of The Pier Film Festival, Mine, Mother, Silnce Within, Susan Everett