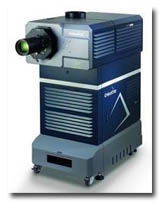 I have teamed up with old film school buddy, Julian Richards, to release ‘Gone Fishing’ as a support for his feature film 'Summer Scars', which is released in cinemas this June. This is great news as it means that Gone Fishing should play around the country in cinemas, and it’s a wonderful revival of the old short supports a feature model that was phased out when the US multiplexes began to dominate distribution in the eighties.

Details are still sketchy, but one hurdle that I will need to overcome is the fact that we will be presenting digitally (though we may also present 35mm in some theatres). 'Summer Scars' was shot on HD and we are now looking at creating a version of the film in the Digital Cinema (aka D-cinema) format of JPEG2000… Like we need another format!

What is JPEG2000 then? It’s a version of the film that is compressed and encoded with special anti piracy measures, which is saved to a hard drive and that drive is later ‘plugged’ into the projector and screened digitally. For us nerds, I have found this out so far…

If you are providing the content in digital form, it must be in a JPEG2000 format that meets the SMPTE 429-6-2006 D-Cinema Packaging standard, to be loaded into the servers. These units will playback either 2k or 4k content.

It’s a completely new format and development for me so I will report back what I find. I even want to see this hard drive and how its ‘plugged’ onto a projector the other end, and hopefully, find out a way that its possible to make this file yourself at home (though I am informed this is not possible). Maybe the film can even be delivered on a DVDr asd a file to be copied to servers? All will be revealed in due course.

As for revenues, it’s very unlikely that we will make any money out of this release, but you never know! Both Julian and I have committed to attending designated screenings to do a Q & A session after the films, to add a little value so we may see you when it’s playing in your town, if we make it to your town that is!

One Response to Gone Fishing Gets a Theatrical Release!