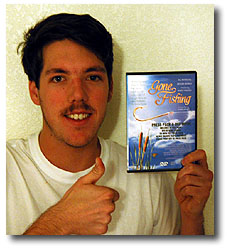 A question I am often asked about the video webisodes is, ‘how do you film then when you are on your won…?’ in short, I grab someone and put the camera in their hands and say, can you point this at me please? And away we go. Occasionally, I am lucky enough to find a person who is really interested in getting involved, and one such person is new film maker Ryan Dustin. I enlisted Ryan at the Sedona Film Festival, you can see the blog here, and he had a great time shooting. I gave him a few lessons on the spot and he hit the tarmac running.

After the festival was over, Ryan told me he was involved in a student festival and he would love to screen Gone Fishing, which of course I was happy to help with. And so here’s Ryans report from the event that just took place…

It’s 6:00 P.M. on a Friday night and a blizzard has just knocked out all of the power in Flagstaff Arizona!  The roads are buried in snow, and you can’t see 5 ft in front of you.  The 2nd annual Northern Arizona University Student Film Festival is less than an hour away and it doesn’t look like anyone is going to be attending.  This is horrible, considering the fact that a spectacular short by Chris Jones called “Gone Fishing” is going to be screened; you might have heard of it by now!

By 6:45 P.M. there are maybe 20 students in the audience, including myself, my
friends and the other staff.  20 minutes later, the library theater is filled with 90 plus students, I still don’t know how it happened, but it did, thank GOD!

We start off the festival with 3 Looney Tunes shorts, and then we get into the main attractions which consist of other wonderful shorts by film makers across the country.  The fourth and final short is “Gone Fishing” and I strut up to the mic with confidence and introduce the film, the lights dim and I get excited.

The end credits roll, and with them comes an outburst of applause!  The students absolutely loved it!  Afterward, the film students were so excited about the film and were saying, it was one, if not the best short films they’ve ever seen.  The cinematography was outstanding, the story was lovely and beautiful.

So even a blizzard couldn’t keep students away from seeing the award winning “Gone Fishing” which was a complete smash hit!  It was the talk of the festival!

Thanks for letting us know how the film played in snowy Flagstaff Ryan!

Stunt Co-ordinator gets onboard
What's the secret to getting through a huge script on limited resources?
Guerilla Film Makers Masterclass Alumni Rhys Davies: Micro Budget Horror Case Study, Relea...
How Getting Involved In A Community Film Festival Can Inspire You As A Film Maker
The Top FIVE Steps To Getting Your Film Funded
Great Write Up on IndieFest.com!
There’s a new kid in town…!

One Response to Gone Fishing plays for students in Flagstaff, Arizona