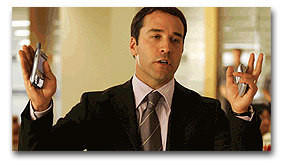 'It’s never been bloodier in Hollywood!'

That’s what my Manager, Andy Trapani, said to me when I met him for a sit down at a mid sized agency in LA today. There is a real sense of fear in the business with ever decreasing opportunities and the credit crunch forces the movie business to downsize.

But Andy is currently very excited as the film he co-produced last year, The Haunting In Connecticut, has been a smash hit, taking $23m in its opening weekend. He said, ‘yes there are people popping champagne corks right now…’ This is a terrific figure as it was number 2 at the box office, beating the Nic Cage behemoth ‘Knowing’. I did take note though, he wasn’t popping champagne with his colleagues, he was with me trying hard to break me into a business that really doesn’t want to know right now.

Andy warned me, ‘Don’t expect Entourage…’ and while the guy we meant was not Ari Gold, I did feel a little like Eric from the show as we made our way in.

We were meeting with an Agent that Andy had known for some time, someone he had a good working relationship with, and we were simply having a ‘meet and great’. Kind of like a first date. The Agency was mid sized by LA standards, and when comparing it to my experience with some London agents, I did laugh. Back in old Blighty, somewhere in Soho, there would be a small door next door to a sex shop, that would lead up three flights of rickety stairs to small office with no air con, so in the summer people melted. Welcome to a mid sized British Agency! This is a LONG WAY from that experience with a spacious, ultra modern feel that makes me feel at home right away. The tattooed and pierced receptionist confirmed that I was in the right place. The reception is buzzing with young talent, and rather conspicuously a very leggy blonde in an even shorter skirt. Probably an actress? Maybe a producer? Ah Hollywood!

The agents office is very sparse, just an iMac and some papers, a table and four chairs. This guy clearly spends a huge of time in meetings and on the phone, and operates a ship with cleared decks.

We start chatting and I am immediately struck by the candour and directness of the conversation, which is such a welcome relief as I am used to people speaking in meaningless hyperbolae.

So to summarise, here is some of what we discussed… This is all of course prefaced by the fact that right now Hollywood is hurting with the credit crunch, there is very little work out there, and even the smallest of films are being pursued by named directors. The heat is on. Just how I like it! OK…

1. The fact that I did not have expectations of walking into a studio gig was welcome. As was my understanding that it was going to take time and laser focus to create any results.

2. The strategy suggested was to build my team, starting with Andy, followed by a great agent and lawyer, then to go out hard, fast and wide with a number of projects. That means I need to get those projects ready for the market. Putting it another way, don’t be in any rush to get out there, get all you players and products into shape first.

3. Build on ‘Gone Fishing’, which means not taking projects to Jerry Bruckheimer, but going the Spielberg style route, so DreamWorks and Imagine Entertainment.

4. Use your team to create a ‘REAL’ plan, then the next step is key, WRITE IT DOWN, and then take action on that strategy, and revise it as needed.

5. Real talent and ability does seem to be a sought after commodity, and the belief is, if you have either, and stay the distance, you will sooner or later find success. It will probably be later though!

7. Getting a script rejected by 40 producers, agents, managers, execs etc. may feel like bad news, but it could also mean you have 40 new relationships, and if the script had something great about it, maybe you have 40 new fans too.

We discussed much more too…. and I left thanking him for his generosity and time.

As I departed, I gave Andy the prerequisite LA bear hug that we creative blokes do over here, and I headed for Starbucks to get working RIGHT AWAY on my plan, and my new screenplay. It’s coming together well too, though still in the concept stage… But I have a title now…

'Swinging With The Finkels', Inspirational Script to Screen with Jonathan Newman
12 ways to rewrite your British written spec script so it sells in Hollywood
Foster / Hollywood Update
How To Write For Hollywood And Live In The UK: Podcast with Stuart Hazeldine
Short film opens doors in LA for Brit Film Maker
Get a job in Hollywood... detailed insight into the dream factory
Gone Fishing plays MethodFest AND Lake Arrowhead Film Festivals!
A story of courage from Australia to inspire us all..

2 Responses to It’s never been bloodier in Hollywood!