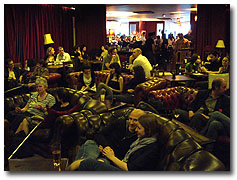 What a night last night! WOW! I presented Gone Fishing and gave a short talk in the biggest living room in London, at the Roxy Screen and Bar in Borough, South London. The room was crammed with sofas and arm chairs and provided a great environment for an intimate screening and chat. DP Vernon Leyton was supposed to be with me, and we would have made a good double act I am sure, but he damaged his Achilles' heal while running, so he is now reading scripts with his foot up on a stool.

I had been invited to speak by Erich, who runs the London Independent Film Festival, and I am happy I took up his offer as I really enjoyed the evening. The crowd was about 50% film makers, 50% punters there for a bit of ‘culture’ (in fact my girlfriend gave up her seat to three city girls in heels and suits, who commented in broad East End accents… ‘where else can you get a drink, dinner, a chat and some ‘cultaare’ all under one roof!’)

I decided to sell DVD’s too and sold a few for a tenner a pop (a good lesson as every penny helps). I just announced it when I was on stage and was later approached by people who wanted to buy a copy. I also managed to sell a few of the online seminars after people had listened to me for an hour. One film maker was gushing with enthusiasm and wanted to sign up on the spot!

There were some familiar faces in the crowd too. One really super thing about festivals is you get to know the film makers who are on the circuit too, and I had a lovely drink with the even lovlier Devi Snively (I know! What a GREAT name!) who was there form LA. I had met her at MethodFest and we hob nobbed for some time. She had her film playing, Death In Charge (and also flew over for SciFi London next weekend), but I am more interested in seeing her other films now, such as Teenage Bikini Vampire and Confederate Zombie Massacre! Now those a proper MOVIES!

Also in the crowd was superstar Leilani Holmes, who regular readers of the blog will know has helped out hugely with Gone Fishing by dealing with lots of online stuff for Gone Fishing at festivals. Leilani is part of a unique group of film makers in London who self finance shorts. It’s called OTT films and you can check out their website here. Lielani was there to support one of the OTT films that was paying in the fest. Go girl GO! 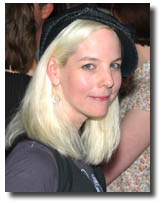 UPDATE – Devi just emailed me with her good news! Here's what she said…

'It seems my script "Paige & Hadley's Prom From Hell" has won the LIFF screenplay award (yay!) and is sponsoring this event as part of my prize.  Too fun! It's a character-driven slasher film and I'd value your feedback should you have any interest.  Please spread the word if you know anybody else who might have interest.  I'm hoping to knock out my final rewrite so I can get this baby off the shelf.

GO GO GO Devi!! (I can't make it as I am at another awards ceremony, fingers crossed!)

FREE online seminar, 'Making Web Based Comedy and Films' with the Misery Bear Team
Day 1 at Incubate in Tilburg
Production Manager Gets Onboard
Using video blogs to share your film experience... Rhode Island from the archives
Nine personal and shocking experiences that reflect the terrible underbelly of SOME film f...

The Mystery Box…
End Of The Pier Fim Festival

One Response to Playing the London Indie Film Fest!