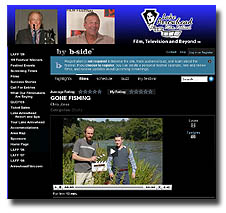 There’s a new kid in town, when it comes to online film festival support systems, called B-side, and its being rapidly adopted by lots of festivals. Frankly I have been swamped over the last few months and when I got an email from a festival saying ‘you should add your information to B-side…’ I must admit, I groaned. Here we go, yet another online system to learn and drain more time and resources.

So I asked the very lovely and talented Leilani Holmes, an AP on Gone Fishing, to help out and see what B-side is all about, and if it’s worth it, to deal with it too. Here’s what she learned…

Gone Fishing has been to a myriad of festivals in the US lately and a few of them have had partnership with a company called b-side who provide free festival programming interfaces to over 200 North American festivals.

Each festival has its own B-side webspace, and they are all similar in format but are customised and integrated to the festivals own website and provide a full interactive festival programme. Filmmakers can upload stills, trailers and import their film blog, while audiences can schedule what they will see to their own calendar, rate and review the films and share their festival experience both on the site and via Facebook and iPhone apps too.

Though at first I found it rather an odd novelty, I can see the benefit of an interface where filmmakers (as well as festivals) control the information used so they can manage audiences during a festival, as well as giving people greater access to their films and themselves.

Of course, it is an extra task for filmmakers to complete, and the onus does tend to be on the filmmaker to get the relevant information uploaded. If, like ‘Gone Fishing’, your film gets into multiple festivals that use B-side, the page information files including all the stills, trailer and blog can just be copied over to the new festival by way of a quick email to b-side. Again it’s up to the filmmaker to check the page and ensure the info is there. The technology is not difficult to get to grips with and the guys and girls at b-side are friendly and helpful if you need to email them for assistance.

The upside of b-side is that compared to other social networks like Facebook, Myspace and Twitter, b-side is a way to directly connect with the people attending the festivals your film is playing in.

It’s a little under-used at the moment. We haven’t seen much web feedback for Gone Fishing’s pages despite some large audiences at the fests, but that might just be due to the current technological learning curve we are all going through with networking applications. So sure, there’s room for improvement, but I think over time, technology like this will grow and as people become more accustomed to sharing and interacting electronically, I think sites like b-side could prove to be a great asset for indie film.

All in all, b-side seems to be a basic but useful tool for festivals, filmmakers and audiences at present, especially those who take the time and trouble to use it to their advantage. I’d be interested in seeing a European equivalent.

You can check some of the Gone Fishing pages here…

There is also a video about how B-side works here…

Thanks Leilani for sharing what you learned, and thanks for taking the time do it in the first place!

If you want to know more about the fabulously talented Ms Holmes, she has a website here…

Using video blogs to share your film experience... Rhode Island from the archives
50 Kisses selected for the Rhode Island International Film Festival 2014
Mankind Is No Island, Interview and Film
Subtitles for Festivals
We are going to the Bahamas!
Gone Fishing plays for students in Flagstaff, Arizona
Gone Fishing Gets a Theatrical Release!