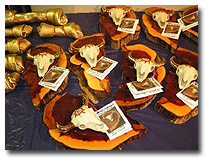 We have had a very busy weekend. Those of you following me on Twitter will know that I spent it running around like a blue arsed fly, shooting a wedding video with my good buddy Simon Cox, for my girlfriends sister – it’s the blessing / curse of being the film maker in the family. I did learn one thing though, shooting HDV eats battery power about 40% faster than shooting straight DV using the same camera.

But the real action was taking place across the world at a gaggle of film festivals.

It began late last week with the win at Palm Beach! Followed closely by the win for best screenplay at Newport Beach, both of which I reported on the blog. Yesterday I also reported on winning at The End of The Pier Film Festival in Brighton too, courtesy of our casting director Cathy Arton. Since then I have been frantically checking the websites of other festivals in which we played in this gridlocked weekend… Here’s what else we managed to collect.

First of, we won Best International Short, The Bone Head Award (pictured above), at the Bare Bones Film Festival in Muskogee, Oklahoma. I like their style! What I have discovered is that many US festivals have Best Short (domestic) and Best Short (international) and of course we are always up for the international award.

Next we got word that we also won the Best Short Film at the Hollywood First Glance Film Festival in LA, which was attended by Gone Fishing AP (associate producer) Kerry Finlayson (who had a frantic weekend driving between events). We could still snare the Audience Award there too as we are waiting for the ballots to be counted – fingers crossed.

Then I got an email from Rincon, Puerto Rico, to tell me that we had won Best International Short Film there too! Blimey!

Finally, we also heard from another Gone Fishing AP who attended a festival on our behalf and she has written us all an account of the events, so I will leave it to her to announce the win on the blog in the coming days when she emails it to me and sends me some photos.

It’s a real shame I was unable to attend these festivals as I feel very passionately that where possible, film makers should attend the festivals to support their film, the festival, but most of all, to connect with the audiences and get real feedback for their films. It’s tough though as jetsetting across the globe is expensive, especially if the festival does not even cover any accommodation (though you can often rough it by sleeping on someone’s floor or spare bed).

Anyway, just getting my head around the rapidly expanding amount of awards we are collecting!

Lessons Learned On A DSLR Drama Shoot... Day 2 Wraps
The Top FIVE Steps To Getting Your Film Funded
How To Crowd Source Your Movie Poster Design... run a competition!
Production Manager Gets Onboard
What's the secret to getting through a huge script on limited resources?
Report from the End Of The Pier…
They queued all day, around the corner, to see the film…

One Response to Can you believe! MORE AWARDS FOR GONE FISHING!