Some time ago I asked if any of our 175 Associate Producers would like to attend a film festival on behalf of Gone Fishing (I have run out of money!). Of course there would be no expenses or flights, but certainly a ripping time and life experience to be had. From my home town, Wigan in the North West Of England, Louise Steggals said that she would like to go to one. And Cape Fear on the Eastern seaboard of the USA was the festival of choice.

Louise got involved in Gone Fishing when she read an article in the local newspaper about what I was doing – she didn’t know me or my family, but she responded to the write up and sent us £50 toward the budget. Every little helped as you know.

And like so many Associate Producers on Gone Fishing, Louise maintains that it was the was the best £50 she ever spent! I now hope to get that same newspaper in Wigan to run a feature on Louise and her leap of faith, and (spoiler alert) take some pics with her and the trophies we won!

Anyway, here’s the Cape Fear Experience in Louise’s own words.

At the time of writing, I am currently sat in Wilmington International Airport waiting to start the long journey home, keeping a close eye on my suitcase which has Gone Fishing’s TWO awards carefully wrapped up inside (I should get a third award for the most creative use of bras) with my fingers and toes crossed that I don’t smash our glass gongs en route (“glass gongs”…now there’s a euphemism).

Yes, the momentum has yet to falter as we claimed the Best Film award for our category (Faith-based/Family) and the Audience Choice award – the culmination of a crazy 72 hours at one of the most fun festivals I have ever been to.

Back-track to the beginning and I didn’t know what to expect as I landed in North Carolina.  It’s easy to understand how celebrities can get into that whole lifestyle; I have never been taken care of so well in all my life. 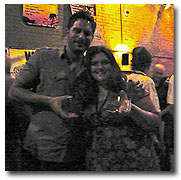 Random strangers would offer me rides to get downtown (included one lady who started giggling hysterically and insisting she wasn’t crazy as she turned the wrong way into a one-way street), I had a very nice hotel by the beach, and the festival host, Joe Manganiello (who played Flash Thompson in Spiderman and Owen in One Tree Hill) very kindly gave me rides around the festival locations (I will have to scour Us Weekly to see if there’s any mention of Joe being spotted in town with a “mystery brunette” – that would be hilarious!)

Gone Fishing, as you may have guessed, was really well received.  Everyone wanted to know about how the trick with the ducks worked and they loved the scene where Devon Murray battles to catch Goliath.  The film-makers really loved the whole feel of the film, how slick it looked, how complete the story was…I was very honoured to be basking in Chris’ reflected glory as the accolades and compliments flowed and I got a handful of cards from film-makers and actors interested in any opportunities with Chris – when Joe himself asked to be considered for future projects I nearly fell out of my chair (a potentially fatal move as we were in a moving car at the time).

There were some really amazing short films that deserved to win recognition – the competition was stiff in my opinion – and I answered questions as best I could.  We didn’t win the grand prize – that went to a very compelling documentary called “I am a Man” about the civil rights movement – but a lot of people had said how much they enjoyed the film and knew it would do well.

Several producers have been talking about replicating Chris’ ingenious funding model for their own future projects.  And they’re very interested to see Rocketboy come to fruition.  I would thoroughly recommend this festival to any film-maker.  The people are wonderful, the creativity is amazing and it’s been a real pleasure to come out here and fly the flag for Gone Fishing, which continues to prove to be the best money I ever spent.

Tomorrow I Fly Out To Finland for the Tampere Film Festival, and maybe the Northern Lights
More Cash and Crewing!
Guerilla Film Makers Masterclass Alumni Rhys Davies: Micro Budget Horror Case Study, Relea...
How one filmmaker secured a UK distribution deal for their £30k horror movie WITH advance!...
Day 1 at Incubate in Tilburg

They queued all day, around the corner, to see the film…
EXAM gets its world premiere!