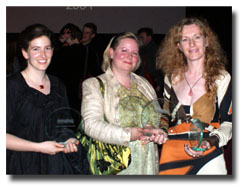 Last Saturday, I was at my girlfiends sisters wedding, video camera in hand, dutifully making the wedding video for the family (the curse of being the film maker in the family!), which meant I was unable to attend the End Of the Pier Film Festival Awards, and so I asked Cathy Arton, our casting director, to attend in my stead. Here’s her report.

Last week Chris asked me if I would be able to attend The End of the Pier International Film Festival Awards ceremony in Worthing.  How exciting to be asked to go to another festival on behalf of Gone Fishing.  What a truly wonderful event.  I take my hat off to people like Brian Gartside and partner Roz, Festival Director, who champion the importance of film in society. The End of the Pier International Film Festival is a very important festival attracting filmmakers from all over the world.  Brian manages to get many of the local business interested in supporting film and now to actually invest in films.

Again, as at the OnFilm Festival for independent film, I had the tremendous opportunity to meet fellow film makers.  I met a filmmaker called Mihal Brezis, whose film ‘Lost Paradise’, opens on two people making love, unsolaciously shot, the two people are purely and joyfully naked and making love.  The complication arises when we see them getting dressed and we, the audience, see that the woman is a religious Muslim and the man is an orthodox Jew.  ‘Lost Paradise’, made by Mihal Brezis and her film making partner Oded Binnum, won Best Short Drama film.  In Mihal’s acceptance speech, she espoused the hope for true peace in the Middle East.  I also got into conversation with Susan Everett, writer and director of ‘Mother Mine’.  The premise of this film is an adopted daughter looking to connect with her biological mother.  This film is phenomenally executed in every way.  Outstandingly directed and acted, I would urge anyone who has not seen it yet to try to see it.   Unsurprisingly, Susan’s film took home two awards, Best director and Best Actress in a short drama for actress Kelly Harrison. Best UK Feature film went to the beautifully made film; ‘Ambleton Delight’, written and directed by Dan Parkes.

I am completely awe struck by the wonderful reception “Gone Fishing’ has had around the world.  It is an absolute honour to be a part of this experience.  Thank you Chris.

Thanks Cathy, and I am delighted with the outcome. I am even more delighted that Susan Everett’s film, ‘Mother Mine’ collected two awards too. Hers is a strong and brilliantly executed commercial movie that I suspect has been overlooked at other awards and festival, because it dares to grip the audience, and it's a ripping yarn. My experience is that Euro festivals and awards don't like stuff that is comercial and popular in its story or execution. So well done Team Mother Mine, you deserve these awards and more!

Tomorrow I Fly Out To Finland for the Tampere Film Festival, and maybe the Northern Lights
Top Ten Microbudget Tips: With a crew of 2 and budget of £500... what can be achieved? Jaw...
Networking With Film Makers… how do you do it?
Nine personal and shocking experiences that reflect the terrible underbelly of SOME film f...
Dragons, Reapers and Guerilla Filmmaking: Turning Writer to Director With My First Short ‘...
500 Today, so let's celebrate with a win at a Newport Beach!
Can you believe! MORE AWARDS FOR GONE FISHING!