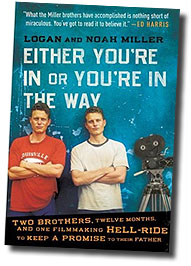 There’s a new film making book out there, a kind of Rebel Without A Crew for 2009, called ‘Either You’re In or You’re In The Way’, about Logan and Noah Miller, who managed to make a top notch US indie feature called ‘Touching Home’, starring Ed Harris. They had no past experience, contacts or budget. We like it already! I bought a copy, and it is a ripping read for sure, full of detail, inspiration, passion and humour… But on page 29 I was astonished to find this passage…

ON THE DRIVE back to L.A. we listened to Bob Dylan and stared out the window at the passing farmland. When we arrived at our apartment, we threw our bags inside and walked to the bookstore. There was no time for self-pity. It was time to find out what we didn't know.

One month had already been ripped from the calendar. We needed to make a battle plan, devise a strategy for the road ahead. We wanted books by people who had actually made movies, not academic works on moviemaking, but practical experience from frontline soldiers. We walked over to the entertainment section and plunged in.

"We need to buy these," Logan said, holding a stack of books.
"You're out of your mind," Noah said, adding up the sticker prices in his head. "We came here to read, not buy. If it's important, write it down."

"What do you want me to do, write down the whole damn book?"

"I don't know. Figure it out. You're a smart guy. We ain't buying anything."

Noah has a flair for loud candor. He yells in public. He's the asshole who has the argument in the crowded elevator. It's not as if he's deliberately rude, because as soon as you point out he's yelling and disturbing others, he whispers. Yelling is just his habit of communication. He's what a therapist might call "passionate."

The sales pitch hung in the air. Noah grabbed the book and flipped through it. We barely had enough money for rent. The business of death had drained our savings.

Fifteen minutes later Noah looked up from the book, a religious transformation in his eyes.

"We gotta buy this."

Blimey! I gotta get in touch with these guys! As it would happen, we are also working on a new Guerilla Film Makers Handbook project (a completely new volume) and we are looking to include as many micro budget success stories as we can, to add to our current list of ‘micro budget must see movies and must find out how they did it…’ I have seen quite a few of these films on my travels to festivals over the last year, but I also know that so many have slipped through the net… maybe you may have seen one or two…

We are trying to draw up an extraordinary list of international success stories that will help empower and inspire all emerging film makers. This will form a large part of this new project we are undertaking.

It’s only fitting that it’s American Independence Day
Can you write a 500 word children's bedtime story for Christmas?
And it was all going so well... Or was it? Filmmakers, Screenwriters, Creatives... Are you...
Congratulations to the 25 Selected Authors in our Father Christmas Bedtime Stories Book
Joe Eszterhas’ ‘The Devil’s Guide to Hollywood: The Screenwriter as God’

Logan and Noah Miller, Rebel Without A Crew, ‘Either You’re In or You’re In The Way’

The Guerilla Guide To Cannes!
We are SOOOO going to need a bigger shelf!